Almost two months after their long-time guitarist Japps advised that he would be leaving the band, the remaining members in Phoenix In Flames continue their search for a new guitarist. 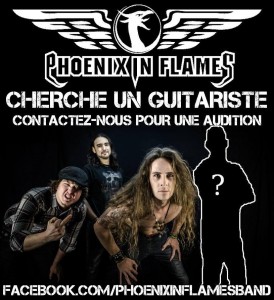 Speaking exclusively with Sleaze Roxx back in late January 2016, Phoenix In Flames lead vocalist and bassist Cornelius Black talked about since when Japps decided that he would be leaving the group: “On January 19th [2016], we had not play together in almost seven weeks. Of course, we always take a short break during the holidays but most of the band members were eager to start working again on the group’s multiple projects so we all gathered to discuss future plans. Globally, we were sharing the same vision and this is why we were rather surprised when Japps made his announcement just the day after the meeting. He wrote us a very beautiful and touching letter explaining the reasons of is departure.”