Quebec, Canada based rockers Phoenix In Flames are having some fun with the apparent departure of one of their band members by promoting a contest to see who can guess who will be leaving the group. 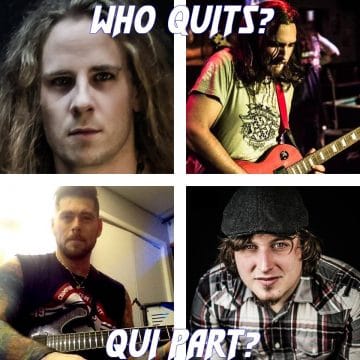 Phoenix In Flames posted the following on their Facebook page earlier today:

Previously on October 20, 2016, Phoenix In Flames announced via Facebook that their gig at the Rock Cafe Le Stage in Trois-Rivières, Quebec, Canada on October 29th would be their last with their current line-up and that they had a major announcement that they would make.

With respect to Phoenix In Flames‘ previous EP Rise From The Ashes released in early 2013, Sleaze Roxx stated in its review: “Had someone given me Rise From The Ashes to listen to without letting me know who the band was, I would have never been able to guess that it was the same group that would later release Howling For Power. First of all, Phoenix In Flames had a member playing keyboards (Mike DaniHell’s, who apparently left the band to study cooking), and secondly Black is actually singing on Rise From The Ashes — albeit with a French accent at times — compared to the “growls” that he often let out on the follow-up. Finally, Rise From The Ashes has better overall songwriting and a retro feel to it, akin to the great ’70s hard rock and metal records that had full-time keyboardists to complement the sound.”

Phoenix In Flames‘ “Sunday Hero” song from Rise From The Ashes EP:

The 5th track of the EP ”Rise From The Ashes” by the Canadian hard rock band Phoenix In Flames.facebook.com/phoenixinflamesbandphoenixinflames.com