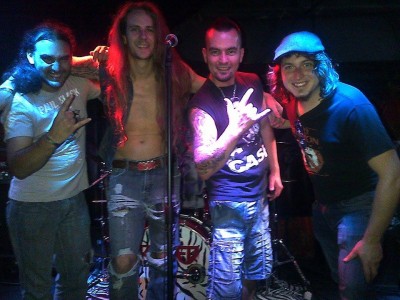 Canadian hard rockers, Phoenix In Flames, have begun the search for a replacement for their now former guitarist Japps  given that the latter announced three days ago in a French message on the group’s Facebook account that after seven years with the group, he was leaving it. Phoenix In Flames have released two EPs thus far: Rise From The Ashes in 2013 and Howling For Power in 2014.

Speaking exclusively with Sleaze Roxx, Phoenix In Flames lead vocalist and bassist Cornelius Black talked about since when Japps decided that he would be leaving the group: “On January 19th [2016], we had not play together in almost seven weeks.  Of course, we always take a short break during the holidays but most of the band members were eager to start working again on the group’s multiple projects so we all gathered to discuss future

plans. Globally, we were sharing the same vision and this is why we were rather surprised when Japps made his announcement just the day after the meeting. He wrote us a very beautiful and touching letter explaining the reasons of is departure.”

Phoenix In Flames have recently announced that they are looking for a replacement guitarist on their Facebook site. Black commented to Sleaze Roxx where the group was at in that regard: “Phoenix In Flames have not found another guitar player yet. We currently are in the process of holding auditions in order to replace Japps. Many great guitar players have already shown up and it looks like we’ll be able to choose a new permanent member really soon.” 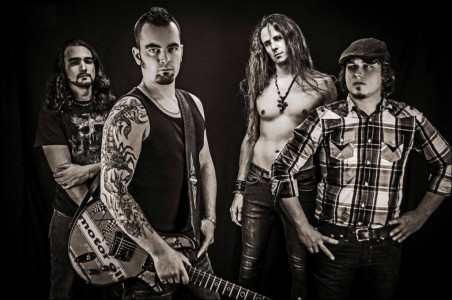 In terms of when we can expect a new EP or album from Phoenix In Flames, Black stated: “We spent about seven months recording our first long play album since last summer. We are currently putting the final touches on it as we are saving money to pay the rest of the studio bill. We definitely gave the best of ourselves in the creative process and I think the hypothetic new guitar player will love playing those songs live. We truly had a fantastic experience at Studio Radicart and this will certainly reach our fans somehow.”

Finally, Black shared his best memories of Japps’ time in Phoenix In Flames: “After seven years of shredding together, I recall a lot of different great memories. It seems that the ones that have the greatest importance for me are the smallest ones. I recall a lot of goofing around during band practice. When there was a party, we were always the two last standing, still jamming songs at the crack of dawn. After all, I only remember the good times!”

The 5th track of the EP ”Rise From The Ashes” by the Canadian hard rock band Phoenix In Flames.facebook.com/phoenixinflamesbandphoenixinflames.com

Phoenix in Flames – The Will to Power