French Canadian rockers Phoenix In Flames consisting of Cornelius Black on lead vocals and bass, Paul Black on guitar, Kakuna on drums, Antoine Monteiro on keyboards and Wade Anderson on guitar will be releasing their self-titled album on October 26, 2019. It is the group’s fourth album after the Rise From The Ashes EP (2013), the Howling For Power EP (2014) and the full-length record Lookout! (2017). 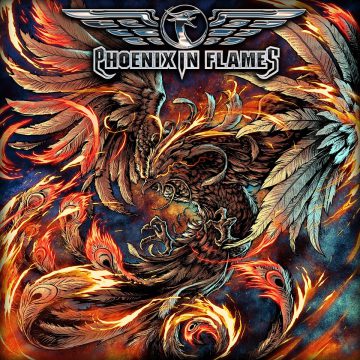 Sleaze Roxx stated the following in its review of Phoenix In Flames‘ last album Lookout!:

“Where Phoenix In Flames are at their best is when they stick to playing rock n’ roll such as on “Steering The Wreck” (with the intro drumming sounding like Twisted Sister‘s “We’re Not Gonna Take It”) with its cool guitar riff intro; “Freedom Has It’s Cost” where singer Cornelius Black is actually singing quite well at times; and, “The Source Of The Vice” which has a very enjoyable pre-chorus portion and some cool “hey hey” parts which would translate well live. I also enjoy “The Storm” which has a cool intro guitar part and sounds like Twisted Sister‘s “Street Justice” with its verses. The closing song “Sad No More” is different than the rest of the tracks but works quite well. I am not particularly fond of when singer Cornelius Black sings along with the music though such as “The Tour Blues” similar to what Ozzy Osbourne often did in Black Sabbath and most notably on “Iron Man.”

Overall, Phoenix In Flames‘ Lookout! took me a while to warm up to. In fact, I couldn’t get through the album on my first listen but upon revisiting it a few weeks later, I have come to enjoy it quite a bit. Is it the best album of 2017? Definitely not but it’s an album that is growing on me every time I listen to it. I think part of the reason for that is Phoenix In Flames offer a lot of variety on their songs so it’s hard to digest the whole nuances of the record on the first listen.”

Phoenix In Flames‘ “Sad No More” video (from Lookout! album):