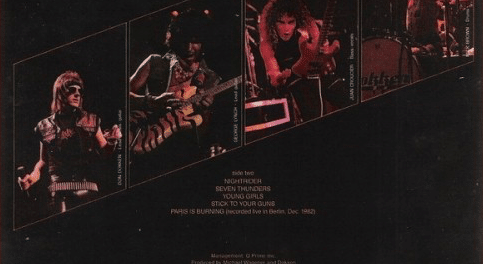 A YouTube video has surfaced of Ratt bassist Juan Croucier signing merchandise for fans at the Hollywood Show. 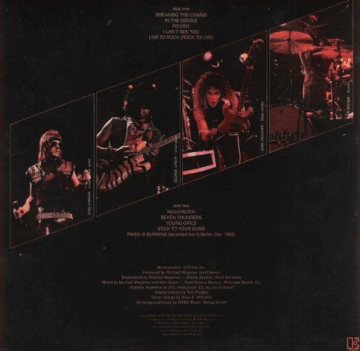 Croucier was asked on which songs that he played on the Dokken album Breaking The Chains to which he replied (as transcribed by Sleaze Roxx), “You know what, the way it ended up happening [pause while Juan signs a Dokken Breaking The Chains album]…” Vinny Appice then asks Croucier, “Did you play on this” to which Croucier advised, “You know what happened, my brother played on three songs.” Croucier then addressed the fan that he was signing the album for saying, “Tell you something that nobody knows. [Pointing to the back cover of the Breaking The Chains album] This is a picture from Ratt from the Roxy, OK? And they needed pictures right away. I co-wrote two songs on this record and the way that it was put together, it ended up my brother Tom played on three songs on bass, and Peter Baltes of Accept played on seven songs because it was pieced together and we didn’t want to re-record it. [Inaudible] So you know, that’s kind of the way it went down.”

Croucier continued: “When I left, I was in Ratt and Dokken for a year and a half. Because we had brought in Michael Wagener in from Germany to mix this record. So Michael got here, hooked up in a studio and started producing other bands and put our record on the side. So I said to Don, ‘Look. I am going to go out and play and make some extra money.’ So he’s like, ‘Oh. Cool. I am totally cool. We’re not doing anything with that.’ Right? So then what happened was. So it was all good [inaudible] and it came up, and he said, ‘Hey, everybody thinks that you’re in Ratt now.’… .”