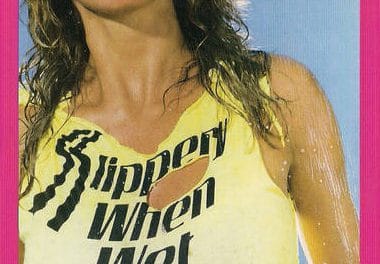 With respect to the album cover for Bon Jovi‘s multi-platinum selling record Slippery When Wet (1986), Weiss indicated: “That was five album covers! First it was called “Wanted” and they were dressed up as Billy The Kid and there was a “wanted” 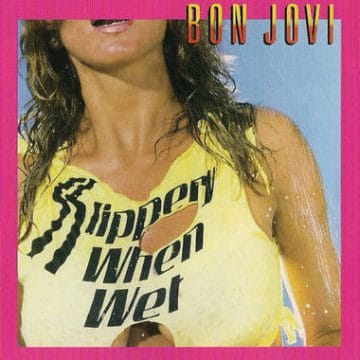 poster. Then we went to Vancouver and we did the band there with the poster on the background without their clean-shaved look. Then, we decided to change the title to “Slipper When Wet”, because it was called “Wanted Dead Or Alive” up to that point.

The idea was to shoot them at the beach with a bunch of girls and their cars. Then, we found Angela, the girl who was on the cover. We needed one more girl for the cover and my friend Danny Sanchez and Tico went across the street and found that girl with large breasts. All the girlfriends didn’t have large breasts… We put her front and center and they used the photo in the inner sleeve I believe, but two weeks later, maybe it was even a week, Jon said let’s get Angela into the studio and shoot her against a blue background and get a plexi-glass to resemble… when we went to No.5 club in Vancouver, it was a strip club where the girls would go to shower with their t-shirts… and it would be in plexi-glass, so that the guys could see. And they would take their top off etc. So, we resembled that in my studio and shoot Angela and that was the cover…

That was the cover until the record company… they said “we love the cover”, actually they’d already printed like 50,000 copies and shipped them to Japan. But, the PMRC hearing was happening back then, in 1985, right before the release of the album. They didn’t want anything to jeopardize the sales of the record. So, we scrapped that and we had to come up with another idea. So, the art director said, “why don’t we use a bar of soap and we get a hand model and carve “Slippery When Wet” on it”? I was like… “I don’t think so”! But, I had to go through the motions. They spent like 2,000 dollars for a hand model and a thousand on a bar of soap and we just did the same thing with the hands and the soap. It’s in the book for the first time. No one has ever seen it before.

And then Jon was like “no, this is not going to work”. So, Jon just came up to my studio the next day, because if we didn’t come up with a picture the next day, it would screw up the release of the records  and it was a very crucial date. So, Jon came up, I didn’t even know what we were going to do, he just said “get a plastic bag and water, I wanna write something on a plastic bag”. I put some oil in it to beat it a little bit and he just wrote “Slippery When Wet”… and before I could even get a picture or a Polaroid he said “that’s it! Send that”.”