Weiss was asked about being arrested at a KISS concert back in the day to which he stated (with slight edits): “That actually changed my life. Because, I used to sell my pictures in front of Madison Square Garden, or Capital Theater, The Beacon, 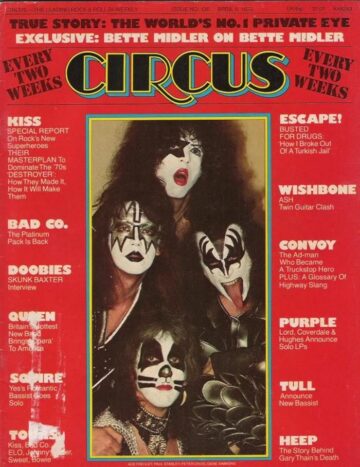 or The Palladium, you know, places close to where I lived. I used to go at the first show, stay up all night and if they were playing another night, or come back later on the tour, or the next city, because I lived in New Jersey, they would play Phily, Connecticut, New York. So, I could shoot one show and go to other shows and sell’em for a dollar a piece to my buddies. That’s what I did with KISS. I took the photos and sold them outside the show. In this case they got me and I went to jail overnight and then I was thinking “Oh, my God! What am I going to do?”.

Then I walked home and I looked at Circus magazine and saw the address and thought “I am gonna go to Circus magazine and show them my work, tell them what happened and maybe they can use me. My photographs were as good as that”. And they liked me and they asked me to shoot with another film, colour chrome, which was sharper and they could make a centerfold out of that. So, when Aerosmith and Ted Nugent played the Giants stadium that summer 1978, I sneaked my camera in and took pictures, it was daytime, so I didn’t have to use flash. And I got some really wonderful color chrome photos of Aerosmith and Ted Nugent. I sent them at the magazine and one month later they were centerfold in the October issue. If there is an open door you’ve got to go through it. Bust it down. Meet as many people as you can and just see where it takes you. There is all these different journeys out there and each time when I shoot with a new band it’s four or five new friends you never know where it will end up.”