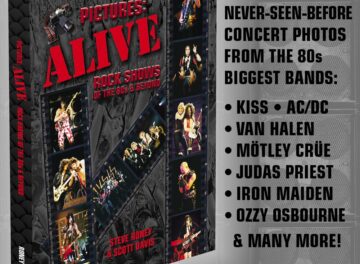 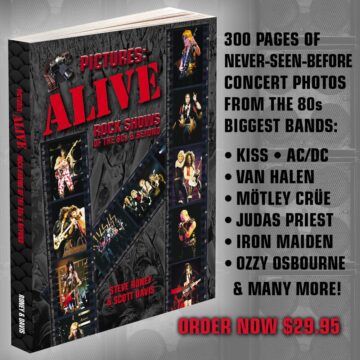 Roney and Davis were interviewed by Chris Czynszak and Aaron Camaro on Decibel Geek TV back in mid-September 2022. Roney recounted a sporty of how he was able to successfully sneak in his camera and film for a Van Halen show back in  1982.

Roney recalled (as transcribed by Sleaze Roxx): “That’s a good story right there. That was Van Halen. That was the night I decided to bring two — this is Van Halen ’82 — same show, same tour. I decided, ‘I am going to splurge. I am going to bring two rolls of film to this show.’ Right? And we’re in line, I gave my second roll to my buddy Al and he put it in his shoe. The other roll was in the camera. And we’re getting close to get up to the front and I’m getting pat down, and they — I get caught. They [said] ‘What is that?’ ‘[Roney sighs] Fuck’. And now I’m holding up the line. Everyone behind me wants to see what I am sneaking in, right? It’s embarrassing. So I pull out the camera and [they say] ‘Hey! No cameras allowed! You got to put that back in your car!’ I said — I just thought — This came to me instantly, I said, ‘I don’t have a car.’ I was lying. ‘I don’t have a car. I just got dropped off. Just take my film.’ And the security guard goes, ‘You only have one roll of film?’ ‘Yeah, that’s all I got.’ He goes, ‘OK.’ And he took the film and let me bring my camera in [smiling]. So we get in and get down on the ground. We get down to the floor and my buddy Al gives me the film and from that roll of film is the picture of Eddie [Van Halen] jumping in the air. Everything from that Diver Down show which at the time was some of my best shots.”

You can purchase the book Pictures: ALIVE – Rock Shows of the 80s & Beyond via Pictures Alive‘s website. As of press time, the book is selling for $29.99 US. You can listen to the rest of the interview with Steve Roney and Scott Davis on Decibel Geek TV below: