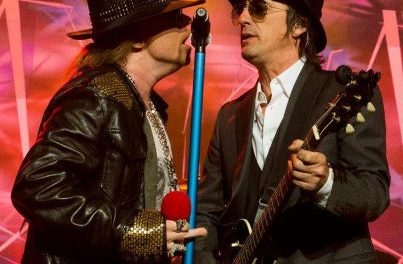 LA Weekly ran an article back on October 22, 2016 about former Guns N’ Roses rhythm guitarist Izzy Stradlin‘s background trying to piece everything together as the elusive former GNR member has lived a life mostly outside of the public spotlight since his departure from the iconic band more than two decades ago. 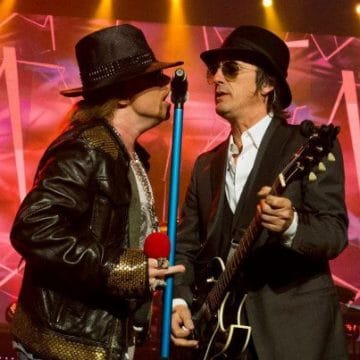 The following are excerpts from the LA Weekly article:

Izzy Stradlin now lives where nothing moves. While his old gang reunites for a world tour, the co-founder of Guns N’ Roses is semi-retired in California’s secluded Mayberry: the quaint Ojai Valley. He’s holed up there in a midcentury home hidden behind a wrought-iron gate and hot pink rose bushes; the same hue as the jacket he wore to a Judas Priest concert at the Long Beach Arena in 1984…

To his critics, Stradlin is a deserter; to the purveyors of his cult, a purist, an unwilling arena rocker whose integrity was bruised by GNR‘s success. When he was a no-show at the music video shoot for “Don’t Cry,” a Use Your Illusion power ballad he co-wrote with singer Axl Rose, it was the beginning of the end. “I’m just not into the big production videos,” he told his hometown paper, the Lafayette Journal & Courier in 1993….

Aside from his vast library of underachieving music, I didn’t have very much to go on in my search. Izzy‘s the only Gunner without a proper biography. The one from 2005, Dust N’ Bones: The Untold Story Of Izzy Stradlin, doesn’t qualify. “I just threw it away after I realized it wasn’t something worth reading,” says Jimmy Ashhurst, the former bass player in Izzy’s Ju Ju Hounds.

Because of this, and because of Izzy‘s own reclusive nature, some basic details of his story remain vague. Stephen Davis, author of Watch You Bleed: The Saga of Guns N’ Roses (a somewhat reputable bio by the author of Hammer of the Gods) writes that Izzy was born in Florida, 1962…. 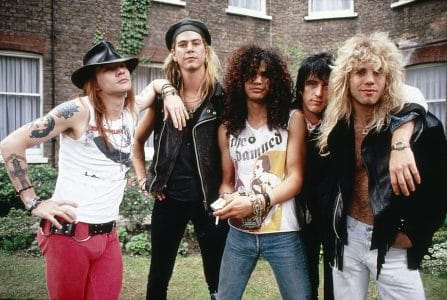 The reality is that Izzy Stradlin — real name: Jeffrey Dean Isbell — was probably born in Lafayette, Indiana, on April 8, 1962, east of the Wabash River, at a time when train tracks still ran through the city’s downtown. His family has deep roots in Indiana….

Izzy started on drums, but his real musical awakening came in the form of the Ramones, who appeared on the syndicated TV variety show Don Kirshner’s Rock Concert on Sept. 19, 1977. “The Ramones were my favorite,” he told TuneCore’s Jeff Price in 2006. He learned how to play the guitar by listening to Johnny Ramone play rudimentary riffs on tracks like “Judy Is a Punk.”…

So how did Izzy and Axl‘s Midwestern bromance fade?

One source tells me Izzy discovered heroin in 1983, around the same time he and Axl formed the short-lived Hollywood Rose band. By the time GNR became MTV’s most-hyped rock band, circa 1988, heroin had made him increasingly paranoid. “I remember he was living in Sherman Oaks so he could be away from Hollywood, with all these black drapes to keep the sun out,” says Ashhurst, who describes the scene like the strung-out John Frusciante interview from 1994, where it looked like flies were swirling around his head. “He had all his dope rolled up in socks and looked like this Gollum creature.”…

By the time Izzy got sober in 1989, he couldn’t go back to being the guy who quietly smoked cigarettes in the basement of Hollywood clubs like the Cathay de Grande in early ‘80s, where Morris remembers first meeting him as a “real unassuming guy, who kind of just kept to himself.” The smack had given him an aura of invincibility, so without it, he wasn’t comfortable being a star. “He was just happy doing what he was doing in those early days,” Morris says. “He didn’t need all the crap that came with being a megastar.” 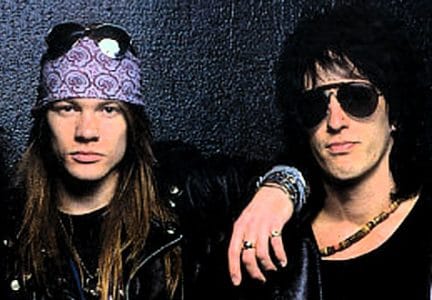 Between 1988 and 1991, Izzy‘s relationship with his band slowly turned from hot to cold steel. During the recording of Use Your Illusion in 1989, Izzy began to protest the album’s high drama by putting himself out of the picture. “Because the album reached such gargantuan proportions as far as the production and complexity and the massive expectations,” Slash told Music Radar in 2011, “Izzy started to bow out. He was harder to find, because that was against his rock & roll philosophy, which I totally agree with.”…

Eventually, Izzy claimed he could no longer deal with the complexities of being in a band with Axl Rose. “I had a bus, they had a plane. And I beat them to the gigs,” he told MTV‘s Kurt Loder in 1992.

On Nov. 7, 1991, it was announced that Izzy had quit the band, which happened just as the GNR train was rolling off the tracks. His last show as an official member of the band took place at Wembley Stadium in London on Aug. 31, where he sang lead vocals on “14 Years,” a song he collaborated on with Axl in 1990, combining two tracks they had been working on separately. The lyrics tell the story of a friendship falling apart. It could also be a song about a girl who complains a lot, or a band fighting for respect (a recurring theme in a number GNR songs), but most fans assume it’s about Izzy and Axl….

Izzy, who no longer makes public appearences, hasn’t played in front of a crowd in four years. The last time he played a show that I could find any record of was on Dec. 3, 2012, in Los Angeles, where he was a guest during Aerosmith’s Global Warming tour. He wore a three-piece suit that night and played “Mama Kin,” a song GNR covered in their early days. He wore the same suit for two more gigs, on Nov. 23 and 24 at the Hard Rock Casino in Las Vegas. A former manicurist at the Hard Rock Spa — who claims she slept with Izzy Stradlin in the summer of ’88, during a GNR tour with Aerosmith, listening to Cinderella’s Long Cold Winter on his tour bus — told me she ran into Izzy at the Hard Rock. “He seemed distant and spoke cryptically,” she says. “He wasn’t himself, at least not how I remember him.”…

You can read the rest of the article at LA Weekly.