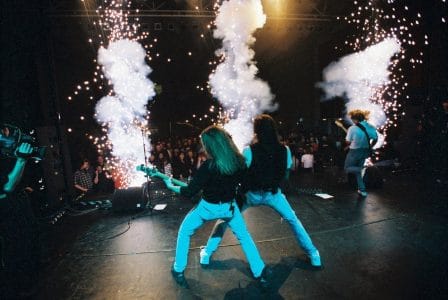 German rockers Piledriver have released a Status Quo medley of songs from their forthcoming Blu-Ray entitled Brothers In Boogie – Live in Concert, which will be released later this year.

The group’s Status Quo medley of songs include the tracks “Caroline,” “Whatever You Want,” “Down Down,” “The Wanderer,” “Rockin’ All Over The World” and “Caroline.”

Sleaze Roxx stated the following in its review of Piledriver‘s studio album Brothers In Boogie, which was released back in the fall of 2015: “The tracks on Brothers In Boogie won’t set the world on fire for being the fastest or speediest but quality, finesse, brilliant songwriting and moderate paced classic rock are all on hand making the songs very easy to appreciate. The guitar playing and sound is stupendous.” Sleaze Roxx concluded its review by stating: “The only pity about Piledriver‘s Brothers In Boogie is that it was released back in 2015 because had it been released in 2016, I would definitely consider it for Sleaze Roxx‘s Top Ten Albums of 2016. Give this album a chance folks. This is quality stuff!”