German rockers Piledriver have released a video for their song “Last Words” from their forthcoming Blu-Ray / double CD entitled the BOOGIE BROTHERS live in concert, which will be released on June 9, 2017. 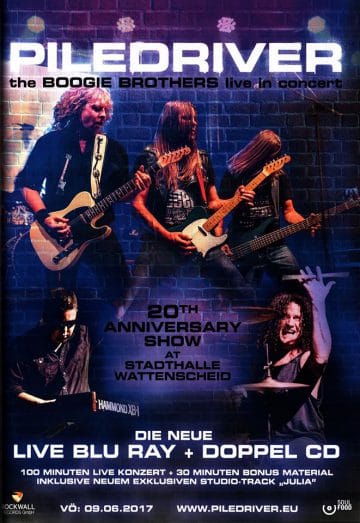 “The brand new PILEDRIVER video for “Last Words” has been released today. The song is taken from the latest album “BROTHERS IN BOOGIE” and the video is also featured on the upcoming Live Blu-Ray “the BOOGIE BROTHERS live in concert“, which will be released on June 9th….

“LAST WORDS” is a farewell and a very special song to us because it is dedicated to 2 men who will never be forgotten. Their names appear at the end of the clip. Feel free to share and spread the word!

Sleaze Roxx stated the following in its review of Piledriver‘s last studio album Brothers In Boogie and the song “Last Words”: “It is difficult to choose which are my favorite songs on Brothers In Boogie because every one of them is a good one. There is however one song which always stands out whenever I listen to the album and it’s the record closer “Last Words” which clocks in at over eight minutes. You also get the very condensed version as a bonus track and which is less than half in length. The feel and atmosphere of the song “Last Words” reminds me a lot of the overall feel on Petra‘s Double Take, which is one of my favorite albums of all-time. There’s something magical about “Last Words” and it’s obviously a special song for [Michael] Sommerhoff who dedicated the track to the memory of his deceased father.”