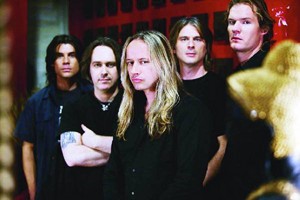 Kosta Zafiriou, drummer and original member of Pink Cream 69, has left the band. He will be replaced by his good friend and long time drum tech Chris Schmidt, who played drums for Sunstorm, Harry Hess’ First Signal and more.

Kosta says, “It was a very hard decision to leave the band I co-founded back in 1987, but I am sure this is the right step. Due to my various activities with my company Bottom Row plus being the drummer and manager of my new band Unisonic, more and more I felt I was retarding Pink Cream 69’s career. Chris is a great drummer and a good friend of the band since many years, which makes him the perfect match for Pink Cream 69. I wish the guys only the best and look forward to see the first show with him — as a visitor, enjoying the songs that accompanied me half of my life!”

The band already started recording the successor to the ‘In10sity’ album on the 1st of March. The new, yet-untitled, effort will be released by Marquee/Avalon (Japan and SouthEast Asia) and Frontiers Records (rest of the world) in the autumn of 2012.

Says guitarist Alfred Koffler, “The vibe within the band is very enthusiastic and creative. There are far too many strong songs by Dennis (Ward), David (Readman) and myself to pick from. There will be eleven of them on the album plus a couple of bonus tracks for the different markets and formats. We also will have guest appearances by two famous musicians on the new record — both fans of the band. More on that soon!”