Thorne was asked a number of questions about his time on the Sunset Strip including in Ratt and his interactions with the legendary but now deceased singer Ronnie James Dio.

In terms of whether he thought that Ratt were ever going to become this great and successful band, Thorne indicated (with slight edits): “I believe Dan Tarsha was the engineer on that version of “Tell the World” on Metal Massacre. I was the bass 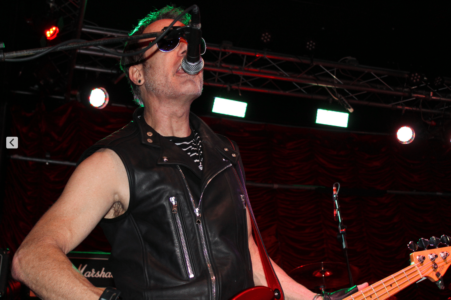 player back then not the engineer or producer…that didn’t begin till the mid-90s. Yes I did write some of the music to “Back For More”, the main riff or the so called chorus. Stephen wrote the rest. The day I believed Ratt would appeal to the masses is after the first time I heard “Round and Round” on KMET.”

In regard to why he left Ratt, Thorne stated: “Jake E. Lee was leaving the band and I had another opportunity to join a band called Sarge.”

Rough Cutt were managed by Wendy Dio back in the ’80s and Thorne was asked how that management came about to which he indicated: “One of the players in Rough Cutt had a good relationship with Ronnie. Ronnie was introduced to Paul [Shortino‘s] voice via demo and he believed it was very unique and from there it developed into him producing and his wife managing.”

With respect to what he remembers about his interactions with Ronnie James Dio, Thorne recalled: “He was a very intelligent, generous and talented individual. He took care of people. He let Craig Goldy and I live at his house in Tarzana for a good year while he was on the “Holy Diver Tour”. In addition, as the opening band for Dio, he graciously permitted Amir [Derakh] and I to ride on his tour bus during the majority of the “Sacred Heart Tour”.”

You can read the rest of the interview with Ronnie James Dio at the Rock Pages‘ website.