Montreal, Quebec, Canada based rockers Playhouse have released a new single titled “Turn It Up Louder” and will be playing a gig for the first time in 24 years at the Piranha Bar in Montreal on November 24, 2017.

The following message was posted on Playhouse‘s Facebook page yesterday: 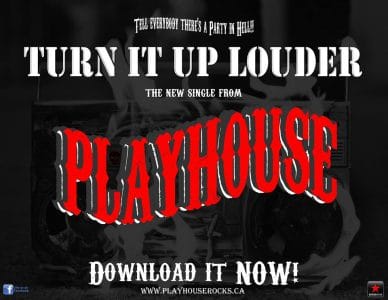 “Our New Single – Turn it Up Louder

In terms of the group’s first gig in 24 years, the group posted the following on its Facebook page on November 2 2017:

Playhouse has some very special guests joining us on November 24th at Piranha Bar and we are pumped!

The festivities will kick off with Less Than 4!

Our old buddies will get the party started with their special brand of acoustic mischief and mayhem! You are guaranteed a good time!!

That’s not all! Dee J Twisted will be spinning headbanging tunes for you all night long!! 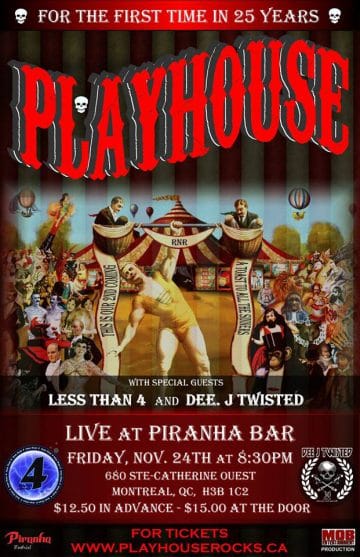 It will be EPIC!

Join us on November 24th at Piranha Bar – Get your tickets NOW!”

“Influenced by the big hair Rock Gods of that time, five high school friends wanted to play loud! The year was 1987 and they had one goal, to be the biggest rock band to ever come out of Canada.

Playhouse released two E.P..’s; 1989’s Little Monster and the follow up; Tongue, Tied & Twisted in 1990. With a reputation for high energy shows and big chorus anthems. they quickly started filling every club they played. Now armed with a dedicated fan base solidly behind them, local promoters came calling. Soon Playhouse found themselves opening for the likes of Extreme, Killer Dwarfs, Brighton Rock, Harem Scarem and many more. Then after 8 years together in the Rock n Roll Circus, the band called it quits…and now, almost 25 years later, they are back!

In the fall of 2016 the band reunited and entered the studio for the first time together in over 20 years with veteran recording producer and lead guitarist for Slaves on Dope; Kevin Jardine to record three new songs. The first video; “On Fire” was released in September 2016 with a follow up video released a few months later for “Stand Up and Fight.”

In May of 2017, the band returned to the studio and plan to release their next single this November.”

Playhouse‘s “Turn It Up Louder” song:

Turn it Up Louder | Playhouse