Wikipedia summarizes the history of the track “Little Drummer Boy” as follows (with slight edits): 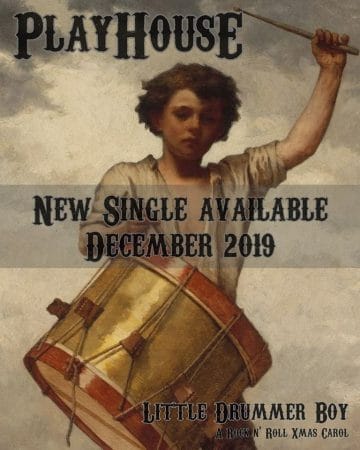 “”The Little Drummer Boy” (originally known as “Carol of the Drum”) is a popular Christmas song written by the American classical music composer and teacher Katherine Kennicott Davis in 1940. First recorded in 1951 by the Trapp Family Singers, the song was further popularized by a 1958 recording by the Harry Simeone Chorale; the Simeone version was re-released successfully for several years and the song has been recorded many times since.

In the lyrics, the singer relates how, as a poor young boy, he was summoned by the Magi to the Nativity of Jesus. Without a gift for the Infant, the little drummer boy played his drum with approval from Jesus’ mother, Mary, recalling, “I played my best for him” and “He smiled at me”.”

“Formed in 1987 during the height of the 80’s Hard Rock invasion, five high school friends set out to be the biggest rock band to ever come out of Canada. With a reputation for their high energy shows and big anthems. they quickly started filling every club & theater while selling thousand of copies of their two E.P’s; 1988’s “Little Monster” and 1990’s “Tongue, Tied & Twisted“. But after almost a decade of decadence and ongoing touring, the band decided to call it quits!

Fast forward to 2016 – the band reunites and enters the studio with veteran producer and guitarist for Slaves on Dope; Kevin Jardine to record new songs. In 2017, for the first time in 25 years, Playhouse returned to the stage with a sold out comeback show in Montreal, Canada. This year the band played many high profile shows and releases their third E.P. “The Rock n Roll Circus” to critical acclaim!