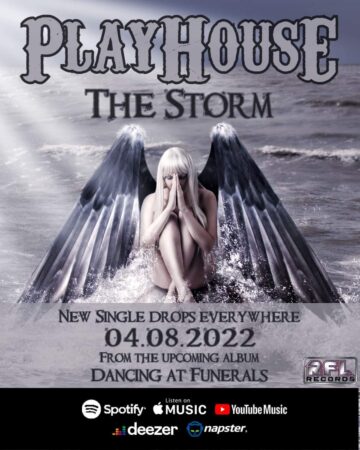 Canadian rockers Playhouse consisting of frontman Peter Cat, bassist Danny Williams, guitarists KK and Eric “Freak” Westergard, and drummer Steve Creephave have unveiled a video for their new single “The Storm” from their upcoming album Dancing At Funerals, which will be released via RFL Records during the summer of 2022.

“Playhouse, Canada’s stalwarts of Anthem-Driven Hard Rock, have inked a worldwide deal with US based RFL Records; Drop powerful new video “The Storm.”

Formed in 1987, five high school friends set out to be the biggest rock band to ever come out of Canada. With a reputation for their high energy shows and big anthems, they quickly began filling every club & theater that they played.  The band was destined for global success, selling thousands of copies of their two EP’s; 1988’s “Little Monster” and 1990’s “Tongue, Tied & Twisted.” Just like so many bands in the early 90’s, the success that seemed to be theirs for the taking never fully manifested and after almost a decade of decadence and steady touring in support of such bands as Extreme, Killer Dwarfs, Lee Aaron and Harem Scarem, the band decided to call it quits. It was an end of an era………but some things never fully come to an end.

Video for “The Storm” can be viewed here:

Fast forward to 2016 – the band reunites and enters the studio with veteran producer and guitarist of Slaves on Dope; Kevin Jardine, to record new songs. In 2017, for the 1st time in 25 years, Playhouse returned to the stage with a sold out comeback show in Montreal, Canada. Many high profile shows followed, including opening slots for The Dead Daisies, L.A. Guns, Buckcherry, Dizzy Reed’s Hookers & Blow, Helix, and Warrior Soul. The band also releases their first album “The Rock N’ Roll Circus” to critical acclaim in 2018 and followed that up with a single and video, “Revolution Tonight,” in 2020!

Digital Single for “The Storm” Available Here for Pre-Save: https://li.sten.to/playhousethestorm

The band has just signed a Worldwide Record deal with US label RFL Records and have completed their new album, “Dancing at Funerals,” working once again with legendary Canadian producer Kevin Jardine (Faith No More, Mastodon, Run DMC, Cypress Hill, Anthrax, Korn, Sepultura, Beastie Boys, 3rd Bass, Men Without Hats). This album is sure to turn a lot of heads and will open ears of the core fans as well as new listeners alike.

Peter Cat – “It’s been a long time coming! We’ve arrived and are super excited to be signed to RFL records; its Playhouse’s time to shine brighter than ever!”

The band will be releasing their new album “Dancing at Funerals” this summer (with details coming soon) and will begin their world, “Too Young To Die Old Tour” in April or 2022.

Danny Williams – “Our new album “Dancing At Funerals” and Playhouse have found an amazing home with the RFL family. We are looking forward to this new partnership and adventure “

The team at RFL Records is extremely proud to have Playhouse aboard.

CEO Jon Marchewka (Marhefka) – “We are excited to have Playhouse onboard. This is a band of veterans that bring professionalism and a hunger that is unmatched. The guys are ready to make a splash in 2022 and we are anxious to help them to spread the word.””