“Rock band Plush premieres its brand new single and video “Better Off Alone,” a track from their self-titled debut album. This song follows the previous single “Hate,” which hit number 24 on the Billboard Mainstream Rock Chart and camped out there for a total of 17 weeks straight. “Better Off Alone” is charged with energy and is a song of empowerment. It’s the kind of rock that resonates with listeners of all ages and has an unforgettable chorus. The video was directed by Dale “Rage” Resteghini.“

The release is also available on CD and will be on vinyl in Spring/Summer of 2022: 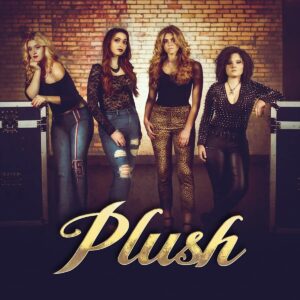 Vocalist Moriah Formica says, “‘Better Off Alone’ is a song about realizing what’s best for you and then doing it. I really hope everyone connects with this song and enjoys it!”

Drummer Brooke Colucci adds, “I love the musicality of ‘Better Off Alone’! The tom groove during the verses is a lot of fun to play. I’m very excited to play this song live, as I believe the crowd will really be able to get into this song!”

Guitarist Bella Perron notes, “I feel ‘Better Off Alone’ represents our chemistry as a band and showcases our vision of empowerment while also highlighting each of our own musical personalities. I hope you all love it as much as we do!”

Bassist Ashley Suppa shares, “This song is not only representative of heartbreak and anger, but also the independence of those feelings and the person who is causing you pain. Leaving is never easy but at times it is necessary. These are the moments in which you truly will be ‘Better Off Alone’.”

Plush has been electrifying audiences during recent live performances across the United States supporting Evanescence, Halestorm, Seether, Mammoth WVH, Daughtry, and SevenDust. The ladies have upcoming tour dates starting in February with legendary guitarist Slash, as well as an official album release party in Albany, NY. For full tour details, check out the dates listed below and visit plushrocks.net.