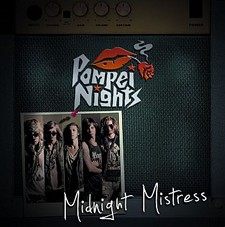 Pompei Nights have unveiled the artwork for the promo single ‘Midnight Mistress’ from their upcoming debut album. The CD will be released in the beginning of 2011 year through Street Symphonies Records.

The single contains two tracks, recorded and mixed by Martin Sweet of Crashdiet — “Midnight Mistress” and “I Want It”. The two songs can be listened to on Street Symphonies Records YouTube Channel at www.youtube.com/user/StreetSymphonies.