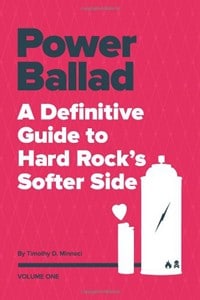 ‘Power Ballad: A Definitive Guide to Hard Rock’s Softer Side Volume One’, currently available for purchase at Amazon.com, revisits the decade of decadence like no other before, putting the big hair and spandex rockers’ most significant pop culture contribution under the microscope.

In ‘Power Ballad’, author Timothy D. Minneci dissects the history of the genre and the defining essential criteria before diving in track-by-track to determine the songs worthy of the title ‘Power Ballad’. Born out of frustration with aninternet culture that had allowed Celine Dion and other non-rock pop stars to be placed alongside “Every Rose Has Its Thorn” and “When I See You Smile”, ‘Power Ballad’ seeks to reclaim the mantle for the worthy, deconstructing songwriting, influences and band histories with perceptive insight and biting humor.

Because all Power Ballads were not created equal, even those who successfully survive the cut are not spared honest critiques, whether it’s Aerosmith’s heavy reliance on outside songwriters and Alicia Silverstone, Jon Bon Jovi’s desire to write a Western concept album, or Great White’s knack for writing cringe-inducing lyrics. Multi-platinum selling acts such as Def Leppard, Motley Crue and Whitesnake receive as much love (and scorn) as obscure lesser-known and less successful bands like Craaft, Tyketto or Southgang, with every song getting a chance to prove its mettle. Fans of classic and hard rock can finally settle the age old debate of which songs are truly worthy of being called a Power Ballad.

Timothy D. Minneci has been living and breathing music since his childhood spent recording songs off the radio onto his double-cassette boombox. In college, he spent several years in the DJ booth broadcasting the alternative music explosion of the 1990s before giving up his microphone for a bass guitar, spending ten years recording and touring with several regional Midwestern bands.

He created and now co-hosts the weekly Dig Me Out podcast, dedicated to digging out lost and forgotten alternative and indie rock of the ’90s one album at a time. ‘Power Ballad’ is his first nonfiction book. When not DJing at hiscollege radio station and earning his degree in Sports Information and Journalism, he wrote pop culture, sports and opinion pieces for The BG News throughout the 1990s. From 2004 to 2007, he edited and contributed to PeopleHaveThePower.org, focusing on political, economic and social issues impacting the state of Ohio. Currently he writes regularly at timminneci.com and delivers the Power Ballad Podcast.