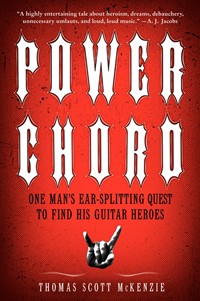 Power Chord is the story of one man’s epic pilgrimage to gain rock enlightenment from the Gods and guitar heroes of the Golden Age of heavy metal. Author Scott McKenzie set off to make contact with the legendary metal superstars he worshipped in his rural Kentucky youth — men like George Lynch of Dokken, Glen Tipton of Judas Priest, and Ace Frehley of KISS — hoping to gain wisdom and a better understanding of the electric guitar mystique. The result is a veritable treasure trove of enthralling behind-the-scenes stories and ‘where are they now’ revelations that will delight anyone who has ever felt a Motley Crue, Guns N’ Roses, or Black Sabbath song reach out from the speakers and grab them by the ears.

When Scott McKenzie was a young man, he thought he saw God…

The deity was all in black with knee-high silver boots, a patent-leather breastplate, and full face makeup, clutching a beautiful, custom Les Paul guitar. Ace Frehley, lead guitarist for the rock group KISS, wasn’t God — but hearing his piercing, shrieking, screaming, outrageous guitar solos was a transcendent spiritual experience for a boy from rural Kentucky, making him feel uplifted, a witness to a higher power.

Two decades later, a grown-up Scott McKenzie vowed to meet Ace Frehley in the flesh — as well as the other gods and demigods who have held divine power over a generation of worshipful metal fans: legendary guitar champions like Glenn Tipton of Judas Priest and Phil Collen of Def Leppard, hallowed names like Steve Vai, Warren DeMartini, and John 5.

Power Chord is a chronicle of Scott McKenzie’s epic quest to stand in the presence of metal greatness — to meet his omnipotent guitar gods face-to-face and get them to divulge their otherworldly secret.

Details on how to order the 320 page ‘Power Chord’ book can be found at www.harpercollins.com.