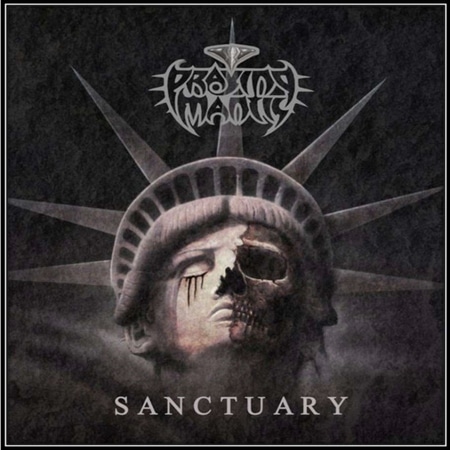 Frontiers Records is excited to announce the release on the new PRAYING MANTIS studio album entitled “Sanctuary” on June 5th 2009 in Europe and July 14th in the USA.

PRAYING MANTIS are one of the prime movers of the New Wave of British Heavy Metal movement. Founded by brothers Chris (bass, vocals) and Tino (guitar, vocals) Troy in the UK, the band debuted in 1981 with the release of “Time Tells No Lies” an album that still today is considered one of the best expressions of that musical period, even if it did not meet with much commercial fortune.

In 1990 Praying Mantis finally reformed with a new line-up featuring two ex-Iron Maiden cohorts: Paul Di’Anno (on vocals) and Dennis Stratton (on guitar), with Bruce Bisland on drums, thanks to the interest of some Japanese promoters releasing a live album (“Live At Last”) in 1990 recorded during that tour. The success gained in the Eastern lands, convinced the band about the possibility of a permanent reunion and with a renewed line-up (the band featured in this time ex MSG singer Gary Barden, then Mark Thompson-Smith and later Tony O’Hora on vocals) they went on to release six studio and one live album.

After 2003’s “The Journey Goes On”, an album that featured different singers, most notably John Sloman (ex Lone Star) and Dougie White (Malmsteen, Rainbow), the band entered a hiatus period, which was finally broken in the summer of 2007, when a new incarnation of the band – formed by the Troy brothers with Benjy Reid on drums, Andy Burgess on guitars and Mike Freeland on vocals – appeared at the Bang Your Head festival and later – in the summer 2008 – at the Headbanger’s Open Air Festival in Germany and at the Bloodstock Festival in the UK, while writing a brand new stunning studio album.

Entitled “Sanctuary” the new Lp was recorded in Atlanta, USA under the direction of producer/engineer Andy Reilly (Asia, The Cult, Bruce Dickinson, FM etc). The music is instantly recognizable and features plenty of great melodies and songs. “Hard to believe but Mantis have been in existence for over thirty years. Quite incredible really that we are still there releasing albums and maturing nicely” says Chris Troy. “This also coincides with the 30th anniversary since the inception of NWOBHM (New Wave Of British Heavy Metal). Iron Maiden have obviously made it and just as importantly have managed to stay up there for this long time. Well done lads! By the way the album title ” Sanctuary “has no relationship to them!! However we do share some history and maybe this album will put us up there with them”.

“I know its probably a cliche statement used by so many bands, but I do honestly believe it is by far the best thing we have ever done”, continues Chris “The lyrics on most songs are quite deep and in some ways dark but I think these suit the music which is intrinsically based on minor chord structures (the saddest chords !). There are some real epics and duelling guitar harmonies in the standard Mantis style and all the fans who have heard it so far have been giving us some great feedback”.

What we have on “Sanctuary” is a band that contains some very fine and experienced musicians who have put together a collection of songs that create a really classic album. “To those have remained with Mantis through the highs and lows of our career we salute you!” concludes Chris Troy “We hope you enjoy the new album and we dedicate it to you. Very special thanks!”

The album will be exclusively presented at the Bush Hall in London, UK on May 3rd 2009 with a special pre-listening session and “Welcome back” concert. More dates and festivals are in the works!