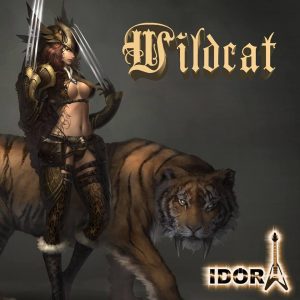 Idora‘s guitarist / vocalist Mike Floros spoke to Sleaze Roxx about how the group came up with the title and cover of the new album: “We came up with the title as a tribute to the neighborhood. Idora Park, itself, had an amazing rollercoaster called “The Wildcat.” In its time, it was one of the Top 10 wooden rollercoasters in the USA. No seatbelts, 80 MPH, pure terror! Riding my dearly departed Ducati 996 would often remind me of that sheer terror one could feel while being twisted on The Wildcat. It seemed only natural to write about sportbike riding and drawing the comparison. Truth be told, I am not as great a rider as the song may suggest, but I have many friends who still ride. The mentions of dragging knees, etc, is a tribute to their skills, as well. I was middling, at best!”

Idora‘s debut EP featured Floros handling the lead vocals for one song while Brian Colkitt handled the singing for the other four tracks. Floros commented as follows about who is handling the singing this time around on the new album Wildcat: “When handling the vocals, we drew certain conclusions. Brian is a “belter” and has much more of that 70’s, classic rock sound. 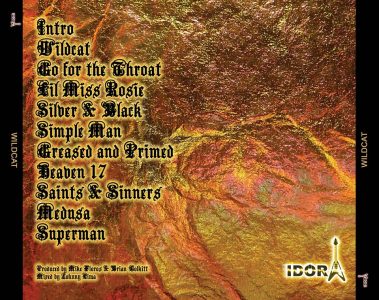 I’m the 80’s guy. I chose songs that would fit his voice and vocal style-songs that had more of that “classic rock” sound. For instance, he covered “Simple Man” by Bad Company and I took “Go For The Throat” by Y&T. I also have a little bit of a higher range than Brian, if you can believe that, so we took that into consideration, as well. I sing more of the songs in the higher keys. The goal has always been to incorporate two singers, at the very least. We’ve always liked bands like Night Ranger and Kiss that had multiple singers in the group, to stretch the envelope a bit and provide a little bit of diversity on the albums.”

In terms of when Wildcat will be released, Floros stated: “We don’t have a release date yet, but it should be released by the end of the summer, at the very latest. The last time out, we didn’t really get the word out until late and I think that crippled us a bit. We’d like to do a proper pre-sale. The physical CD will be available on Bandcamp, as it was with Above The Law. It will also be available for digital download from their website. While we’re not set in stone on it yet, we may use them exclusively this time around. We’re also still working on pricing because we want to be as fair to the international audience as we can. They make up over half of our fanbase. As you know, shipping overseas is terrible. Hell, it sucks to ship to Canada and it’s right next door!”

Sleaze Roxx stated the following in its review of Idora‘s debut EP Above The Law: “Idora‘s debut EP Above The Law is a good and solid debut. I look at the album as a three part album: you have the opening track which has some ’80s hair metal traces, you have the three pure classic rock tracks in the middle and you have that Carribean like feeling song to end the EP. I understand that Idora will be releasing a full-length album in 2016 and I hope that the band will focus on the style of music that they are really good at which is classic rock.”