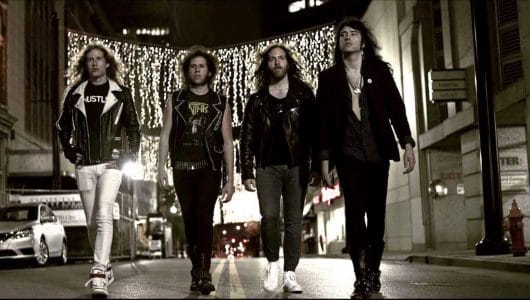 Sleaze Roxx recently interviewed Denman guitarist Dakota Denman who advised how they ended up having Mark Slaughter sing on their debut EP: “I first met Mark super briefly at one of Thee Rock N Roll Residency shows. Him and Michael [Wagener] are really tight though, and we have a song called “Miles Away From Home” which called for some really big vocal harmonies. So, Michael said to me, “Let me call and see if Mark’s in town.” So he calls Mark and says, “Hey Mark, I’m recording this band. Do you wanna do some harmonies?” And Mark says, “Yeah, sounds great. I’ll see you tomorrow.” He came down to the studio and sang his vocal parts and did an amazing job. He was super cool to us. We shot a little video with him in the Camaro that a lot of people have seen. He’s just a really, really cool guy. We ended up shooting the album cover in his backyard with photographer Chad Lee. Mark lit the pyro for it, so that was pretty cool!”

Denman‘s video for “Miles Away From Home” featuring Mark Slaughter:

Denman‘s “Story” on their Facebook page states: “Formed in the spring of 2016 by brothers Ben, and Dakota Denman, recent Nashville transplants who had a vision: to take the Nashville music scene by storm, with hard rock/ heavy metal songs penned by the two, that are well written, raw and full of attitude. With influences such as Metallica, Mötley Crūe, and the mighty Van Halen, they’ll put on a show full of energy that takes you back in time. Their sound is rounded out by the Swedish heavy hitter on drums, Ted Karol, and fellow Nashville hard rocker, Robbie Crede on bass. With guitar solos that will take you up to the stratosphere, These guys mean business, and will be a live act to die for in the Nashville Area live music scene.”