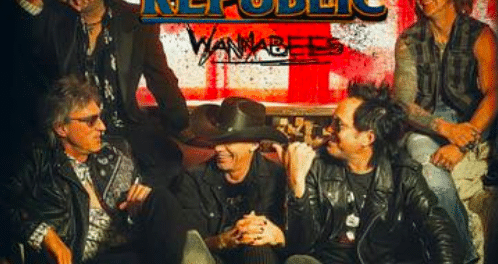 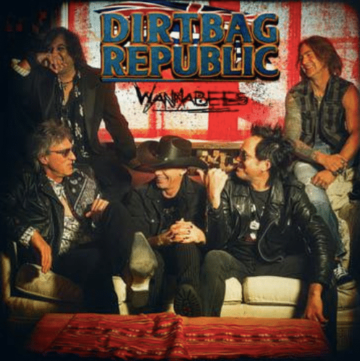 Head First Entertainment‘s press release indicates in part (with slight edits): The video for “Wannabees” was directed by Matt Leaf from Hadron Films (Mother Mother, The Pack AD, k-os and others) and shot in the band’s hometown of Vancouver, Canada. Frontman Sandy Hazard on the making of “Wannabees”: “Filming a video in the middle of pandemic was a logistical nightmare, but the stars aligned and we were able to bang off a simple to the point performance video in short order with a known director.” The single is released on January 8th via Shock Records / Vanity Music Group and will be available on all digital platforms.”

Speaking exclusively to Sleaze Roxx, Hazard was asked about how him not being behind the drum kit and how the group’s three new members — Federici, Worden and Nijjer — have impacted Dirtbag Republic‘s third studio album. Hazard replied: “Mick and I decided we wanted to start doing some live shows in 2019 and were pretty much ready to roll, then Covid hit. The band has been pretty much Mick and I since 2015 with some friends assisting in the studio. The idea was for me to always sing and not do double duty for live shows, but since we were primarily a recording act, I just did the drums on the first two albums and the upcoming release.

Mike Federici originally came in on bass in 2019, but switched to guitar once we added Dave Worden on bass and Ed Nijjer on drums. Mick and I wrote all the tunes on Tear Down Your Idols, so you won’t be hearing much of a difference sound wise except maybe a growth in songwriting, which we strive to improve with each album. Dave and Ed joined after the album was 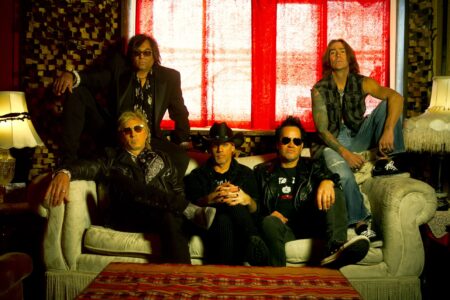 recorded, so in the studio it was Mick, Mike and myself that laid down the tracks. It’ll be cool to have everyone more involved on the next record. Due to Covid squashing our live show hopes, we were able to focus on writing the next album. I’m happy to say we’ve written over 12 songs in the downtime of 2020 that kick some major ass. We now have five great personalities in the band who all have years of rock n’ roll experience. We can’t wait to get out there and play some live shows when we’re able to.”

In terms of Dirtbag Republic‘s debut video, Hazard indicated: “We’ve always wanted to do videos, but self financing everything and using pro studios to mix and master our previous albums gets expensive. We did do a lyric video for “Junkie Girl” off Downtown Eastside and had planned to do another proper video, but we just couldn’t get things lined up. Once Harry Hess finished mastering Tear Down Your Idols, we immediately started scoping out doing a video and who was able to. I reached out to Matt Leaf who’s a well known music director in the Canadian music scene. After some back and forth with Matt, he was on board. It was all done fairly quickly. We booked a local art facility that had a stage and lighting built-in. We spent about three hours doing the video with Matt filming us at different angles and he had it all back to us in about a week and a half. “Wannabees” seemed to get a lot of love from people we played to. It’s got a really big hooky sing-along chorus, and our A&R guy Dave Tedder at Shock Records loved the song when he heard it. We plan to do at least two more videos for the album in 2021, so keep your eyes and ears peeled!

With respect to the decision to release the album in the spring of 2021 even though the Covid pandemic is still going strong, Hazard stated: “Our first two albums were self released. We signed to Shock Records / Vanity Music Group late last year and we talked to our label about a release strategy. The album was slated to be released the summer of 2020, but we thought it would be best to see how things went over the next few months. The music has to go on, so we decided on spring of 2021 would be a good time to release it. Who knows what things will be like then, but hopefully some sense of normalcy will slowly creep back into society.”