Sleaze Roxx is pleased to premiere the Dirty Rock Scars‘ video for their single “Infected” for Lokal Loudness Music & Entertainment. The song is available today for a free download via John Stoney Cannon‘s Bandcamp page.

The song was recorded by Stoney J. Cannon for StoneyTunes Music and mixed by Tony Thomas at DropZone Recording. The video was produced and edited by Steve Johnson for Cyclon Media and directed by Stoney J. Cannon. Dirty Rock Scars consist of Stoney J. Cannon on lead vocals, acoustic guitar and keyboards; Michael James and Darryl Cliett on guitars; Todd Love on bass; Chris Lowery on drums, background vocals; and, The Scar-Letts on backing vocals.

Speaking exclusively with Sleaze Roxx, Dirty Rock Scars‘ frontman Stoney J. Cannon was asked about the idea behind the song and video for “Infected.” The singer replied: “The idea came purely from being asked to write a theme song for an area indy wrestling company called Viral Pro Wrestling. They really push the “viral” angle including slogans about infecting this and that, so being that we are about being dirty and rock and scarred, it was only natural that we could channel all things infected to 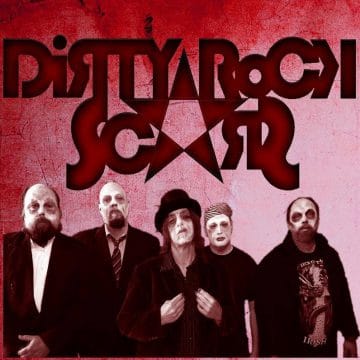 create a song. The idea of infecting, whether it be by way of disease, manipulating society, brainwashing, whatever exists in everything including the themes of art that influenced the video. In addition to wrestling, which most of the guys in the band grew up watching, the video also gives heavy nods to films we grew up obsessing over like the original Night Of The Living Dead and A Clockwork Orange, which also spotlights viral themes such as infection and obsession. The trick was to create something that would not only represent Viral Pro Wrestling properly, but the band as well.”

In terms of how Dirty Rock Scars first began, Cannon advised: “For years, my health kept me from pursing anything other than acoustic solo music and now that I’ve found the cold brew of youth I really wanted to get back to the music that originally grabbed me as a kid and the next thing I knew, I had a whole bag of ’70s glam and punk inspired songs. That was the easy part. Being that few are as music obsessed as I, it took a few months of spitting out talented but not insane enough musicians before this crazy gang got together. [Drummer] Chris [Lowery] turned out to be even more obsessed than me about getting together followed by [guitarist] Michael [James] and [bassist] Todd [Love], and finally my old bandmate Darryl [Cliett] hit me up. Somehow, we all ended up at this over a hundred year old plantation house in rural South Carolina where the only neighbors seem to be a few twisted ghosts but that’s cool. They seem to dig the loud music and the aroma of coffee.”

With respect to whether there is any meaning behind the band name Dirty Rock Scars, Cannon stated: “Well, kinda. At our age, we all have to admit that when we were each first infected by rock and roll, we all were attracted by the entire package of loud music, girls, rebellion, light, dark, glitter… You get the idea. The only thing we had in common with our idols was a desire to become dirty rock stars. We may not have crossed over to any legendary sort of place like the guys in KISS, the New York Dolls, Ramones, Mötley Crüe, etc but we have spent enough time in the trenches to say that as far as being dirty and scarred by rock and roll, we are right there beside all of the aging rock warriors who are to blame for every rock and roll infection we have.

In Dirty Rock Scars, you have many combined years of national and international releases and gigs including some warming up stages for bands who directly influenced us. Throw in the dirty rock scars we picked up trying to get the right group of rockers together, and that’s a whole other mess of scars. Along the way, we concluded that while it was obvious there are musicians out there more talented and cooler looking, there are few as obsessed and dedicated to playing rock and roll. [It] doesn’t take a 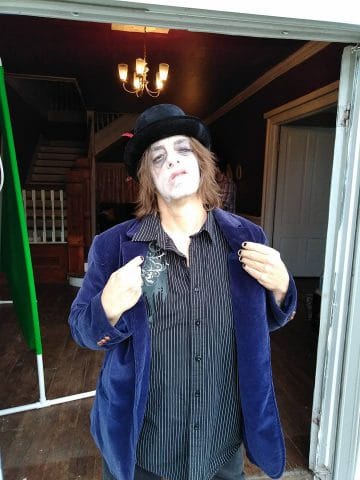 virtuoso to play rock and rock but at the end of the day, you do have to actually play and despite life’s busy schedule, the guys that make up this band go the extra mile to find the extra time and energy to rock. Not because we want to, but because we have to.”

In regards to how did Dirty Rock Scars hooked up with Viral Pro Wrestling, Cannon advised: “In addition to being blessed with wearing many hats musically — writing, production, events, etc. — I also have been involved in writing and hosting articles and shows for various regional wrestling organizations including historical groups and actual wrestling companies.  Not only do we work together on a radio show for Georgia Wrestling History, my son and I are also involved on the production end of Viral Pro Wrestling including video, audio, and commentating so it really was just a matter of taking the challenge of creating a theme for the company and coming up with something cool and infective. The finished result is less lyrically structured compared to what I have written for the band but full of the energy and anthem style I kinda was looking for with Dirty Rock Scars.”

Finally, Cannon stated as follows about Dirty Rock Scars‘ plans going forward: “While the idea of the band was already evolving, “Infected” actually turned out to be the push that was needed to pull everything together. With a timetable created to write, record, and present the song for Viral Pro Wrestling, I was forced to pull in reliable rockers like Mike and Darryl while Chris tabbed Todd to finish things off. We went from months of trying to create this idea of a rock band to Chris and I scrambling around to get this song done and ended up with not only a song that the owner of Viral Pro Wrestling loves but a band that is everything I originally set out to form. Since then, we have pretty much holed up in this old house peeling the ancient paint off the walls and waking decades of spirits up with loud rock and roll. [We have] everything from originals for an upcoming release to the bastardation of the oddest bunch of covers we just love playing.

Honestly, at this stage in our lives, we could really care less about making anyone musically happy but ourselves. If by chance anyone else happens to get infected along the way, that’s just a dirty bonus. We are just going to take our combined rock and roll obsessions and get completely crazy with everything we deem fun and cool about being in a rock and roll band starting with the music, recorded and live, and continuing with consistently infecting our new website with stuff. At our ages, we have pretty much been immunized with so many rock and roll vaccines that getting infected is no longer really a concern. If anything, we’re the carriers those doctors keep warning you about.”