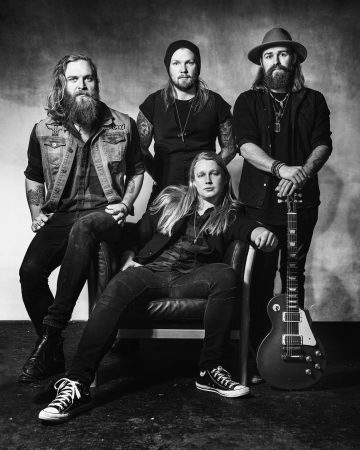 “Since Junkyard Drive came home from their EU-tour with Eclipse, they have been dying to write some new material. The Danish rockers are well known for their good time rock n’ roll, but this time, things have become more serious, dark and melancholic.

“Mama” is a tragic story, about a young man dealing with his sorrow and anger, after the loss of his mother.

Lead singer Kris Johansen says: “Everyone knows the feeling of losing a family member or a close friend, and it is so difficult to just hold on and live your life, when the feeling of emptiness is taking over.””

Speaking exclusively to Sleaze Roxx, Junkyard Drive drummer Claus described the inspiration for the new single “Mama” as he indicated: “A dear friend of the band told us this story, about his situation about his mother’s death, how he felt frustrated and how he was jealous on everybody else’s “perfect life”. We thought it could be a beautiful and a deep subject to write a song about. So we tried to felt what our friend did, and “Mama” was the result. After the tour with Eclipse from Sweden, we really wanted to right new songs. So we took the idea from our friend and did what we do best.”

In terms of finding a replacement for guitarist Birk who left the band back in December 2019, Claus stated: “We have decided to find a new guitarist for the spot, but we will even the guitar parts. So we are not looking for the new Birk, but instead a new guitarist. A replacement for Birk will never be a easy task, so we will wait till we find the right person to take his place in the band.”

With respect to when we can expect a new album from the band, Claus revealed: “We expect the new album to arrive in late summer 2021. So until then, we are going to create the new album, and play some few gigs to try out the new material. We can’t answer right now if our cover of Michael Jackson‘s “They Don’t Care About Us” will be on the next album… maybe, maybe not.”

Junkyard Drive releases their new single “Mama”. “Mama” is a tragic story, about a young man dealing with his sorrow and anger, after the loss of his mother….