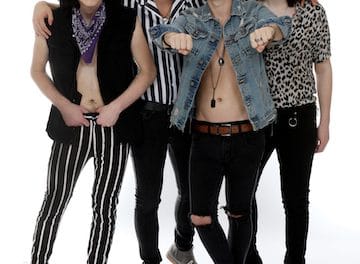 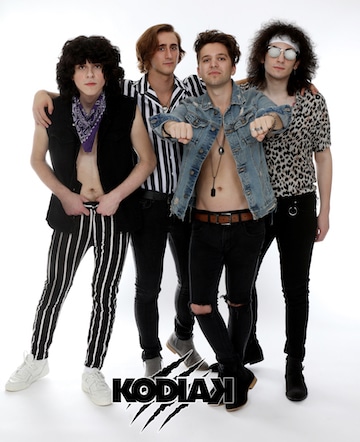 Kodiak consist of Eric on vocals, Chris on guitar, Pete on drums and TJ on bass. The group’s Bio on its website indicates:

“New Jersey’s Kodiak have already turned heads with the number of Hard Rock & Heavy Metal Legends including VH1’s radio host Eddie Trunk who introduced the group playing their first gig, opening for The Appice Brothers at 2019‘s Hall of Heavy Metal History Award Show in Anaheim, California. The group was compared to a young Van Halen! Managing the band is Warren Wyatt from WorldSound and legendary drummer Carmine Appice, who is also producing their debut album, due 2019.

Kodiak just signed a record deal with WorldSound/AWAL Records releasing their debut single “Goodbye” on June 7, 2019. Already gaining radio airplay around the country they were mentioned by Long Island’s 94.3 The Sharks radio DJ Rob Rush “If anyone is worried about the future of rock between Greta Van Fleet and Kodiak, I think we will be OK!”

Kodiak is set to tour in the fall of 2019 and release more music this summer make sure you follow them on social media and become a part of the KDKARMY!”

Speaking exclusively to Sleaze Roxx, Kodiak drummer Pete Biggiani explained how he met Appice and what the legendary drummer has meant to his music career. Biggiani advised: “The best indeed! I met Carmine when I did a drum instructional DVD with him when I was 11 and we stayed friends ever since. Carmine has helped with Kodiak not only co-managing but producing us and really helping us make this band the best it can be.”

In terms of Kodiak‘s similarities with Van Halen, Biggiani noted: “Yes, there are some similarities with Van Halen. Chris [guitar] and I are brothers that formed the band. More importantly, since we were very young, we have always been playing and creating music. After years of doing that, you become rhythmically and musically tight like Eddie and Alex Van Halen. We have always been Van Halen fans but we aren’t a carbon copy. When you grow up listening and covering the music of your heroes, some of that gets passed on into your style. I remember when we were very young and we would play live shows, everyone would say ‘They sound like Van Halen!’ Carmine tells us he hears it as well. We take this as a compliment.”

With respect to Kodiak‘s future plans for the rest of 2019 and beyond, Biggiani indicated: “We plan on releasing some more music this summer and then it will be a lot of touring for the fall. I think we are even going to Alaska at some point. We are also in the process of recording our album right now.”