Sleaze Roxx is honoured to host the premiere of South African sleaze rockers L.A. Cobra‘s video for their new single “She’s My Prison.” L.A. Cobra consist of band co-founder / frontman Don Cobra, guitarist Slade, band co-founder / drummer Callie the Animal and bassist Ewil Honey. “She’s My Prison” is the first new song from L.A. Cobra since the release of their album Shotgun Slinger, which finished at #4 on the Sleaze Roxx’s Top Ten Albums of 2017. L.A. Cobra‘s new single is available on all of the usual streaming platforms.

Speaking exclusively to Sleaze Roxx, L.A. Cobra frontman Don Cobra was asked about the subject matter and idea behind the new single and video to which he replied: “”She’s My Prison” is an anthemic arena rock single featuring screaming guitars, 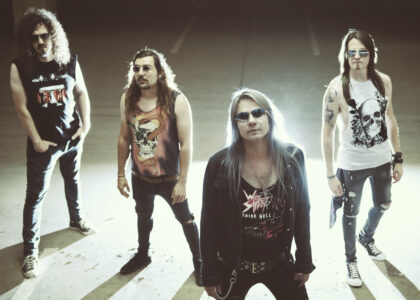 thunderous drums and bass, and a sing-along chorus in what fans can distinctly recognize as L.A. Cobra. The song revolves around the restrictive nature of a failed relationship from which there is no escape. Big thanks to Slade Sleaze for shooting and editing the video🤘.”

In terms of when we can expect the follow up album to Shotgun Slinger, Cobra indicated: “We can now confirm a new album titled Superstition is on the way, and will be released by Crusader Records, which is part of the Golden Robot Records family. We’re also working with Martin Sweet again, which we’re super happy about. Since working with Martin on Shotgun Slinger, we just figured there’s no way we can work with anyone else. He’s part of the family now and I think sometimes musically, he knows us better than we know ourselves 😅🤘.” 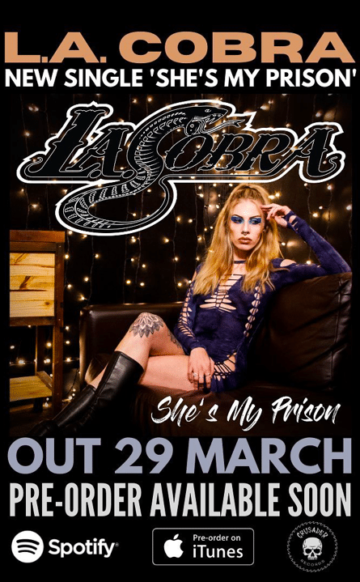 With respect to the impact of the Covid pandemic on L.A. Cobra these last two years, Cobra stated: “Covid was a nightmare I think for all musicians around the world. We had to postpone our European tour twice. I think the only positive side to it was it gave us alot of time to work on our new material. Covid affected me very badly last year. it messed up my voice and I struggled to regain strength in my voice and get breathing back to normal for about four months. At some point, the whole band had Covid and we had to isolate, which delayed our recording process. We can only hope there’s not another wave coming as we’re approaching winter this side of the world.”

In regards to L.A. Cobra‘s last album Shotgun Slinger finishing at #4 on the Sleaze Roxx’s Top Ten Albums of 2017, Sleaze Roxx stated: “This is the surprise album of the year. I really was not expecting L.A. Cobra‘s third studio album Shotgun Slinger to be even half as good as it turned out to be. L.A. Cobra also get the distinction of being the first band from the African continent to figure on a Sleaze Roxx year end top albums list. Given that L.A. Cobra had previously released two albums, one might wonder what is the difference this time around with Shotgun Slinger? Although it’s difficult as an outsider to gage the impact that Crashdïet guitarist Martin Sweet made on Shotgun Slinger, it is worth noting that Sweet is the only artist to ever figure twice at the top spot of Sleaze Roxx’s Top Ten Albums of the Year (with Crashdïet‘s Generation Wild in 2010 and Sweet Creature‘s debut album The Devil Knows My Name in 2016). In addition, Sweet is the only artist to figure three times with three different bands on Sleaze Roxx‘s year end top albums list although this time it’s for the guitarist’s production, mixing and mastering duties. Whatever the case, L.A. Cobra have hit the nail right on the head with Shotgun Slinger delivering catchy rockers with just the right level of sleaze.”