Sell Your Soul (Little Girl) is the fifth single off the 2017 L.A. Cobra album, Shotgun Slinger.The Shotgun Slinger album is produced, mixed and mastered by …

For the occasion, Sleaze Roxx caught up with L.A. Cobra‘s frontman Don Cobra and asked what made the band decide to shoot a video for the track “Sell Your Soul (Little Girl).” Cobra replied: “It was actually one of the first songs we’d written when we started with Shotgun Slinger, and I noticed that it was doing extremely well on Spotify so we decided it’s a good choice for a 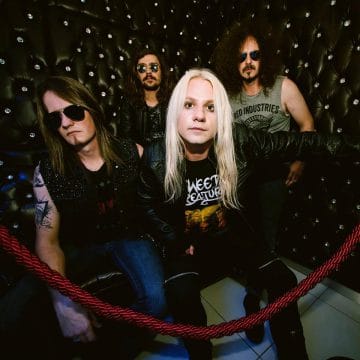 video. In addition, we needed to do a video of the song that was a bit more rough since “War” is more in the line of a power ballad.”

In terms of what the video is about, Cobra advised: “It’s a L.A Cobra performance based video starring top South African model Christelle Du Plessis. The video and song is about when the world is bringing you down, and you know you gotta keep on going. By listening to good ol’ rock n’ roll really, really loud, it makes all your problems disappear. Visually, it’s a bit darker than our previous videos, but obviously it’s more relatable rather than what the modern industry is used too.”

L.A. Cobra are about to embark on their first tour of Europe dubbed 2019 #WTFR — Wrong Things Feel Right European and UK Tour. Cobra noted: “‘WTFR (Wrong. Things. Feel. Right)’ is the title of one of our tracks on the Shotgun Slinger album, and I thought it’s a cool title because so far, since we’ve started booking this tour, everything that’s felt wrong has felt right [laughs].” 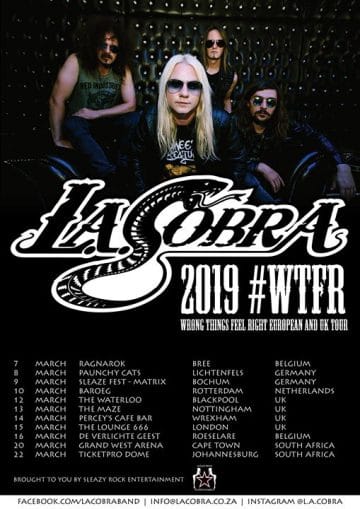 Right after L.A. Cobra‘s Wrong Things Feel Right European and UK Tour, the sleaze rockers will be opening two shows for Judas Priest — one at the GrandWest Casino and Entertainment World in Cape Town, South Africa on March 20th and one at the Ticketpro Dome in Johannesburg, South Africa on March 22nd. In terms of how L.A. Cobra landed the opening slot for the two shows, Cobra advised: “It actually came as a big surprise, and it’s still unreal for us, ’cause when Judas Priest got announced, our tour was booked for Europe, UK and Scandinavia and we were quite sad that we were going to miss their show, as bands like that hardly perform in South Africa. Then one morning, my phone rang and I got asked if we wanted the opening slot for Judas Priest, and I thought it was one of my friends making a prank call while in fact it was a famous South African radio presenter, Mr. Benji Mudie, who recommended us to “Big Concerts” who is bringing Judas Priest to South Africa. That’s why we had to cancel the Scandinavian leg of our #WTFR Tour 2019.

In terms of when we can expect a follow up to the Shotgun Slinger album, Cobra opined: “We are actually in the process of release a 7” Vinyl with “Shotgun Slinger” and a re-recording of an old song “Live to Ride” that will only be available on vinyl. Definitely, we are heading back into the studio at the end of April 2019 to start writing and recording. We have no album title yet, but have some awesome material and can’t wait to lay down some tracks and see what happens.”