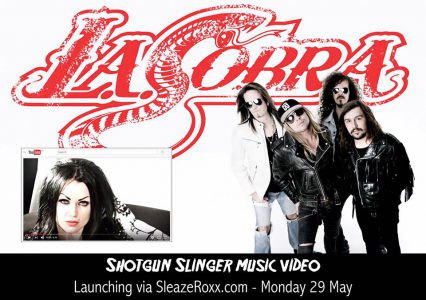 Sleaze Roxx spoke to L.A. Cobra‘s frontman Don Cobra and asked him the idea behind the new video. Cobra stated, “The “Shotgun Slinger” video is our first song-driven performance video actually, with only one character which is “Shotgun Slinger” and is portrayed by alternative model Michelle Swart and Slade, Ewil and Callie The Animal and myself performing. We decided to rather concentrate on the song and band’s performance this time, keeping it simple. The video is in black and white. It symbolizes the “Yin Yang” symbol and as you know the Yin and Yang is a Chinese symbol for balance and harmony, and the opposite forces of nature, basically, this symbol represents the positive and negative forces in the universe and that’s what we’re portraying in this video with the wardrobe and different background colors. Lyrically, the song is about that “one” girl that is just out of your league, but you decide “fuck it” and go for it anyways, even though you know she’s gonna put a bullet in your heart and make you miserable, even “dead” inside… [laughs]. It happened to all of us I guess at some point in our lives. Everyone can relate.”

In terms of how L.A. Cobra ended up working with Martin Sweet on the new album and how the experience was, Cobra advised, “I became friends with Martin and Peter [London] early last year, and ended up going to the “Rest in Sleaze” fest in Stockholm in November 2016. Long story short… the day that I left to go back to South Africa, I left Peter‘s place and went to say

goodbye to Martin in Solna. It was fucking freezing for me as a South African. He arrived on Father’s Day knee deep in the snow to meet me for an early morning coffee. I said to him it would be an honor for us if he could mix a song with us on our new album. Martin then went on tour with Sister in November/December and in February, we spoke again and then we sent him the track “Ride.” It sounded so amazing that we just couldn’t release the whole album without him mixing, mastering and producing it. Martin is one super talented human, and he just knows exactly what we want before we want it… [laughs]. Once again, thanx Mr. Sweet \m/

With respect to when we can expect the new album and how was L.A. Cobra‘s crowd funding campaign, Cobra stated, “The crowd funding campaign is actually still running and there’s 19 days left before it ends. It’s an “all or nothing” campaign basically, but we’re close to our minimum milestone. If all goes well, we’ll release “Shotgun Slinger” at the end of July, and August at the latest. So please friends, pre-order your Shotgun Slinger copy now and help us make it happen: https://www.thundafund.com/project/lacobra 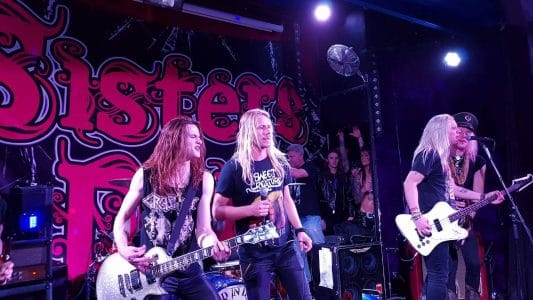 Cobra recently traveled to play The Sleazeball 2017 festival in Australia along with Crashdïet band members Peter London and Eric Young. Cobra stated in that regard: “Yes, that’s correct. I was invited to open the Sleazeball 2017 on acoustic, opening for Peter and Eric. I was super honored when they invited me to do a few songs with them in their set. I can’t explain the feeling man… [laughs]. Being in that moment is a memory I’ll always treasure. For me personally, from when I arrived ’til when I left, our friends Lindsay and Sarah went out of their way to make everything special for us. The fans, the new friends I’ve made and the whole sleaze rock scene is just mind blowing and everyone supports the genre there. I’d recommend every sleaze band to go to the land down under. If all works out, L.A. Cobra might go next year.

Finally. Sleaze Roxx noted to Cobra that he knows all three remaining Crashdïet members and he is the singer for L.A. Cobra. In terms of whether there have ever been any talks of Cobra fronting Crashdïet, the frontman stated: “No. We haven’t talked about anything like that actually. It would be cool though, but nothing like that has been brought up or discussed by any of us.”