Sleaze Roxx is proud to premiere L.A. Cobra‘s video for their song “War” which is the third video in support of their new critically acclaimed studio album Shotgun Slinger.

Prior to filming the video, L.A. Cobra gave their fans the chance to vote on which track from Shotgun Slinger should be the feature of the band’s next video. Speaking exclusively with Sleaze Roxx, L.A. Cobra‘s frontman Don Cobra advised of his reaction to the voting results from the group’s fans and what were the overall results. Cobra stated: “Yeah, I was quite surprised 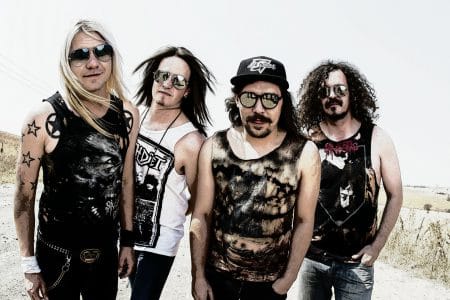 to be honest. I thought people would want to see a video of one of our heavier songs, but with everyone I spoke to, “War” was their favourite. Somehow everyone can relate to the song. One guy said that “War” is our hit and it is a timeless song. If I remember correctly, the voting was something like this:

In terms of the idea behind the video, Cobra advised: “The idea behind “War” is the everyday problems in a modern relationship these days. Why do we first have to fight to have peace in the house? We have two awesome actors in the video — Nastassja Smit portraying the roll of the angry girlfriend who seeks revenge but realised she made a mistake, and Berne Van Rooyen who portrays the roll of the boyfriend, who can’t seem to do anything right and gives himself over to the bad habits of life. Eventually, she…… I think you gotta watch it [laughs]. Every band member also plays a little roll in the video besides performing.

The video was directed by my friend Eugene Koekemoer who was one of the directors who directed the movie I was in called Bustin Chops The Movie in 2013.

With respect to the band’s plans for 2018, Cobra stated: “We’re still awaiting our contract for touring in Sweden, Finland and Norway next year, but there’s also talks to tour in Australia and in Europe next year. We are also planning to release a music video for every song on the album in the next couple of months. We are also very excited to be playing for the first time ever in the States when we will be playing at the Rock N Skull Festival at the end of October 2018 on the same day [Friday, October 26th] as our friends in Crashdïet as well as icons Pretty Boy Floyd and two other performers. So we’ll definitely see you on the road somewhere. Please keep a look out on our Facebook page for the latest updates.

Cobra also performs as a solo performer from time to time. He stated as follows about his upcoming solo plans: “I’m actually playing a Don Cobra acoustic show on December 30th in Milano [Italy] at the Blue Rose Club alongside Emily Van Dark, which is local artist from Italy. This will be my third international solo gig. Earlier this year, I played at The Sleaze Ball 2017 in Adelaide [Australia] alongside Peter London and Eric Young, and a few years ago, I opened for Reckless Love in Switzerland. So yeah, I’m doing some solo acoustic sets, which consist of some 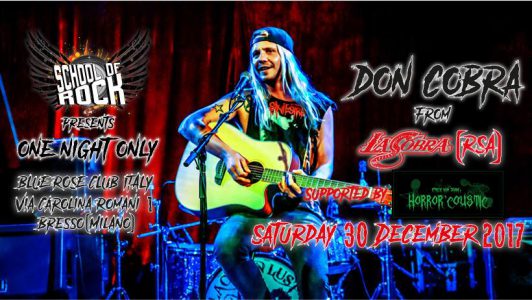 L.A. Cobra songs and some covers which inspired me to become who I am today. If these guys with their music weren’t in my life, I’d probably would have never travelled the world and see and meet awesome people and have these amazing experiences. I can’t wait to go out on tour with the full band next year and experience these stuff together with the boys. Yeah, so if you are in Milan [Italy] on December 30th, pop in and come party with me [laughs].”

You can check out Don Cobra‘s solo gig on Facebook.

Sleaze Roxx stated the following in its recent review of L.A. Cobra‘s new album Shotgun Slinger: “L.A. Cobra‘s Shotgun Slinger is the surprise album of the year for me. I never imagined that I would have liked it so much and really didn’t imagine loving it as much as I do. It’s an album that keeps getting better each time that I listen to it and that is the telltale sign of a classic album. This is one album that you’ll want to check out if you like sleaze type rock with great melodies.”