Speaking exclusively to Sleaze Roxx, L.A. Cobra‘s frontman Don Cobra was asked how come it has taken so long for L.A. Cobra to release their third album? Cobra replied: “We had a couple of line-up changes since How Much Snake Can You Take? 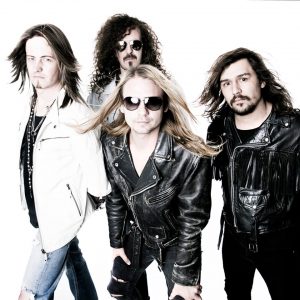 in 2010. It was very difficult to find the right blend of dudes, but now we are a gang breaking hearts and melting faces again and best of friends. We write together, we drink together, we fight together. It’s been awesome having a band where we all have mutual respect for each other, and everyone works hard and plays even harder.

In terms of what people can expect on L.A. Cobra‘s third studio album, Cobra stated: “What you can expect is total madness! Every song is a hit in its own right. Some songs are a bit heavier than the ones on our previous albums, but they all are catchy sleazy rock anthems that are gonna make you listen to it over and over. There are awesome guitar solos, harmonies, big vocals and just the right amount of sleaze to share it with your neighbour’s neighbours. It’s proper old school sleaze rock/metal songs with a modern approach on things to hook the new generation of sleaze rockers around the world — Cobra style! We started writing our upcoming album Shotgun Slinger in December 2014 and we are in the final stages of the recordings. It should be out at the latest at the end of September, which is spring time in South Africa. You can check our Facebook page and/or website for all social media updates. 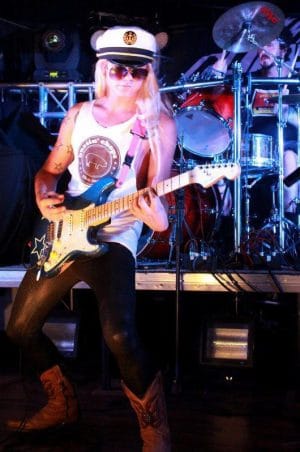 With respect to the group’s bold statement that it is the only sleaze rock band in Africa, Cobra advised: “That is the truth! We are the only sleaze rock band in Africa meaning we’re playing, living the genre with big hair, leather, pants tighter than skin and living the lifestyle while playing our own original sleazy rock n’ roll with trademark high pitched vocals and screaming guitars. No one’s doing that in Africa. We were nominated for the award ‘The I wanna be a pornstar award’ on one of the biggest TV channels in 2008 for our music video “Live To Ride” which wasn’t the norm back then for sleaze rock or even nowadays in South Africa. Somehow, we got radio play and airtime on TV. We did a TV commercial that was broadcasted in the UK for two years, so we have been keeping the genre alive from over here since 2005. I’ve searched far and beyond and haven’t been able to find another “sleaze rock” band over here yet. If there is another sleaze rock band, they haven’t come to light yet. There are some bands dressing up like ’80s rockers but their music is totally different from what you’d expect. There’s also a bunch of tribute bands doing the rounds, and doing a great job too.

South Africa’s got a real big rock scene and tons of rock bands doing the circuit, and tons of fans and rock n’ roll enthusiasts, and then there is also some weird shit [laughs]. I know in Botswana and Namibia, there’s a huge black metal scene happening. If you look at international bands from South Africa, Seether is a huge rock band. There’s also Duncan Faure, Trevor Rabin and lately ZP Theart who was singing for DragonForce and Skid Row. There’s also Dilana that was in L.A. Guns for a while. All are South Africans making it big in the international market and that’s just to mention a few. 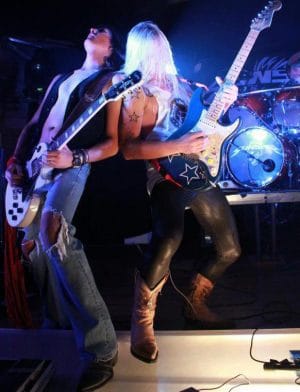 In terms of L.A. Cobra‘s plans touring wise once the new record is released, Cobra stated: “We are going to tour the album locally and do some festivals and whatever may come our way. There are also plans to play in Sweden, Finland, Denmark, Belgium and a whole bunch of countries in Europe next year. We’re still looking for a booking/label agent in Europe and the United States. At the moment, I’m doing it myself and it’s not going too bad [laughs]. If you want to book us, contact me at info@lacobra.co.za.

Finally, Cobra was asked what was the idea behind the video for “Rock n Roll Pretoria” to which he replied: “The song “Rock n Roll Pretoria” is about our hometown Pretoria. I’m the main character in the video, where I lost a lover and become fed-up with everything over here and want to escape from South Africa to the greener grass abroad. So on the way to the airport, the band picks me up next to the road in a Jeep to relive some rock n’ roll memories we had in Pretoria. The lost lover (Piya Botha) then finds me in a bar with Hooters girls and is not too happy. Ironically, she then finds “love” with our drummer Callie the Animal.

The video is a feel good video with some breathtaking and hilarious moments. It also features some famous landmarks and places in Pretoria. It’s a mini movie [laughs]. It consists of a very interesting cast which is L.A. Cobra [Don Cobra, Ewil Honey, Slade and Callie the Animal), Piya Botha who is the daughter of South African rock legend Piet Botha, Eugene Koekemoer who is famous for his hit TV series Af and Mullets and lately starred in the movie Bustin’ Chops with me, and finally, Jahk Poliakov (the “Biker”) who is a very talented tattoo artist. To top the video off, we’re doing a guitar anthem of a famous South African folk song called “Sarie Marais” which creates a patriotic vibe.”