In terms of how Nasty Ratz ended up picking “The Waste” for the next video, Widow indicated: “It was clear from the first moment we heard the demo. We just wanted to do it properly with nice footage, so that’s why we are releasing it as a last single of 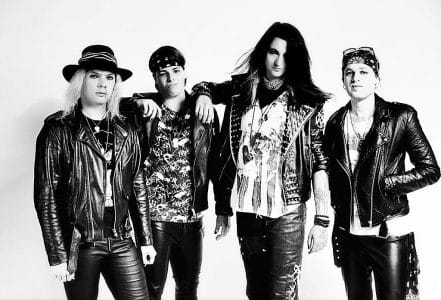 In March 2020, the Covid pandemic spread seemingly throughout the entire world forcing many countries to shut down. In regards to how Nasty Ratz were able to film a video during that time, Widow stated: “It was meant to be recorded in May [2020] but due to pandemic, we had to record it after the first wave when most of the restrictions were over.”

With respect to how the Covid pandemic has impacted Nasty Ratz‘s momentum following the release of Second Chance? in mid-December 2019, Widow opined: “Pretty bad. We had planned a tour of German/Holland before the pandemic striked, which included Sleaze Fest. It was all re-scheduled to 2021 and hopefully it will finally happen. 2020 — it’s the only year in our career that we didn’t play outside the Czech Republic… Really the

first one. It makes me sad.”

In terms of what is next for Nasty Ratz, Widow indicated: “Absolutely no plans for 2020. 2021 looks promising. It’s too soon to talk about it but if it happens, we’ll finally go on tour and that should be extended and expanded to more countries.”

Sleaze Roxx stated the following in its review of Nasty Ratz‘s sophomore full-length album Second Chance?: “If Sleaze Roxx had a Top 15 rather than a Top 10 Albums of the Year list, Nasty Ratz‘s Second Chance? would have definitely made the Top 15 for 2019. If you like Crashdïet, picking up Nasty Ratz‘s Second Chance? is a no brainer. Perhaps the biggest compliment that I can give to Nasty Ratz is that when they released First Bite, I viewed them as a band trying but not making the cut to be part of The New Wave of Hair Metal (I concede that the term was seemingly coined a few years after First Bite‘s release) but my perception has now changed with Second Chance? and I view them now as one of the leaders in that category.”