Sleaze Roxx is pleased to premiere Serpico‘s video for their new single “Midnight Cowboy” from their upcoming album Chosen Four. Founded in 2005, Serpico currently consist of VeeDour on lead vocals, Snake on guitars, Andy on bass and Jani Serpico on drums.

“Finnish sleazy rockers Serpico are revealing the first single “Midnight Cowboy” off of their forthcoming 2021 album Chosen Four set to be released via Rockshots Records. The album is produced by platinum-selling Finnish record producer Anssi Kippo (Children of Bodom, Hanna Pakarinen, Teräsbetoni). Since Serpico‘s inception in 2005, they have released two full-lengths Rose Tattoo (2018), Shallow Mistress (2014), and an EP Bad Commercial (2011) along with touring all over Finland, Sweden, Estonia, Latvia, and England. The band is genuine and unique rock n’ roll with big respect for the classic titans. 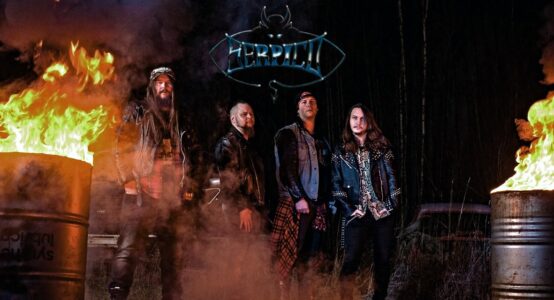 Kippo is in strong demand for genuine and dangerous rock n ‘roll music and comments on producing the record: “I’m excited to work with Serpico on their forthcoming album, which will be recorded on magnetic tape. The analog recording perfectly fits their style as it enables us to capture both the energy and danger in exact detail. It’s awesome to see that rock ‘n’ roll is not dead!”

Speaking exclusively with Sleaze Roxx, Serpico drummer Jani Serpico was asked how the group came up with its name to which he stated:  “Actually, the original drummer Jaakko Kakko came up with the name. Obviously, he was a huge fan of movies. No wonder he ended up in the media business after he left the band.”

In terms of how the worldwide Covid pandemic has impact the release of Serpico‘s new album, Jani Serpico advised: “Yeah, sure it did… We’re having more time to concentrate on the album right now regarding the earlier schedule, which was a little bit tighter I think. But it did affect us in a negative way also because our rehearsing flat was under lockdown for about three months this past last summer, which sucked big time!”

In regard to how does the new album differ from the other records that Serpico have released in the past, Jani Serpico indicated: “First of all, we got offered a worldwide record deal with Rockshots Records and also we have this unbelievably talented producer who’s well known around the world in the rock/metal scene. His name is Anssi Kippo from Finland and I think he is best known for producing and recording Children of Bodom‘s three first breakthrough albums. And we are so excited about this whole recording session because it’s going to be recorded in the old school analogic way! It was one of the greatest things for us when Anssi got interested in our music and band. We have learned a lot from him and that’s why we feel blessed at the moment. He put us in a pretty hard school of “how the band should really play together”, and wow man… We are on fire… We found that groove and all the shit you really should have and feel when you play in the band! It’s going to be a great album and we can’t wait for it to be out for all the true rock n’ rollers! Rock n’ roll is not dead!”