Sleaze Roxx is pleased to premiere The Tip‘s video for their new song “Rock N Roll Heaven” from their forthcoming new album, which will be titled Sailors Grave and released sometime in the summer or fall of 2016. The video was directed by Gary Barrett of Barking At Ghosts (Chicago). 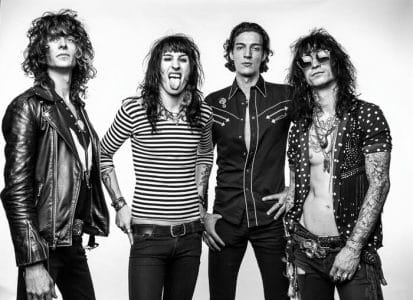 Sleaze Roxx stated the following in its review of The Tip‘s self-titled album, which was released back in September 2015: “This is a great rock n roll album! If you are a fan of ’70s and ’80s style hard rock — no matter what your favorite bands from those decades are — you’ll probably find a lot to enjoy about The Tip‘s debut album if you’re okay with really, really, really, really, really sleazy lyrics. If you’ve got a sense of humor about things or are living the rock n’ roll lifestyle as intensely as these guys, then you’ll find a lot to love here. This is easily one of the best debut albums I’ve ever heard.”

In regard to how the new album Sailors Grave will compare to The Tip‘s self-titled debut album, Dover Jr. stated: “First off, thank you Sleaze Roxx for everything you do! We are done with our second album, and we’re all pumped about the results. The band had a transition period while recording this album, in which we lost our original bassist Drew Uldrich, and picked up our new bass player Robby Boté. A handful of tracks were recorded before Robby joined on, but he was there to help us finish it what we started and track the remaining tunes.

For the first album, we had all the songs ready to go before we hit the studio. With this new album the songs are a mixture of “newer” songs in our live set, unfinished songs ideas, and new tunes we wrote in the studio. There is an even larger variety of sounds on the new record versus the old. Songs on Sailors Grave range from rock, blues, funk, metal, and a 3/4 pirate waltz. We had our friend Tim Boucher, who played keys on the last album, return again to lend us a helping hand tickling the ivorys. Additionally, and Lily Mae Rische, of the Rische family band and Jack White‘s touring band, sings and play fiddle. Plus, we had our good friends Rudy Rude, from Benny‘s old-band the Poor Boys, and Jennifer Friend, sing back up vocals. It was produced and engineered yet again, with the extraordinary Chris Lohr at his house studio in East Nashville.

With respect to what stage that The Tip‘s new album Sailors Grave is currently at, Dover Jr. advised: “The nine-song album is 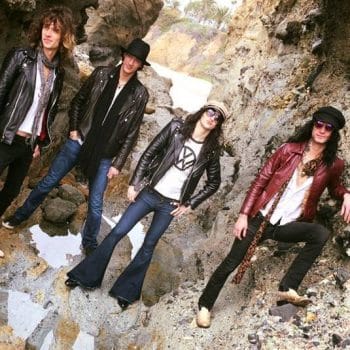 tracked, mastered and ready to go. We’re in the final stages of finishing the album art, which is being done by Dean Tomasek. We are hoping to release the album by late summer or fall, which will be followed by another massive US tour. Most of the recording took place following our January West Coast tour, so most of the recording took place during February and March of this year.”

Dover Jr. revealed to Sleaze Roxx why The Tip chose “Rock N Roll Heaven” as the lead off single for the new album as he stated: “We have been playing “Rock ‘N’ Roll Heaven” in our live set for some months now. Whenever we were done writing the tune, we knew it was immediately ready to play live. Our good friend Gary Barrett of Barking at Ghosts approached us about shooting a video earlier this year and that was one of the tracks that we had ready to go. The video was filmed during our live set at Chicago’s famed Double Door in Wicker Park, and some our our fav local Chicago dive bars.”

After a comprehensive recent tour of the US in May and June 2016, The Tip currently have three shows scheduled in their home state of Tennessee in the US:

The Tip‘s self-titled debut album can be purchased directly from the band’s website in cassette and CD formats.