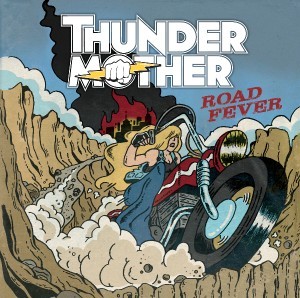 Sleaze Roxx is excited and very pleased to premiere the streaming of Thundermother‘s new album Road Fever, which is scheduled for release on September 4, 2015 via Despotz Records.

In the lead-up to its release, Thundermother‘s Road Fever has received worldwide critical acclaim including from Sleaze Roxx which stated in its review of the album: “A band’s sophomore album is always really important, especially when the group came out all guns blazing with their debut record like Thundermother did with Rock ‘N’ Roll Disaster back in early 2014. What I really like about Thundermother‘s sophomore effort Road Fever is the group decided to step away from the shadows of their AC/DC influenced hard rock and come up with a heavier record that is still rooted in old school hard rock / heavy metal.” In addition, Sleaze Roxx concluded: “Rock ‘N’ Roll Disaster may have put Thundermother on the map but Road Fever cements their position as one of the most exciting new bands coming out of Sweden.”