Sleaze Roxx is pleased to premiere glam rockers Turbo Shokk‘s new single “Backstage Betty” from their upcoming debut album Get Radical, which will be released on December 2, 2016.

This follows the release of Turbo Shokk‘s debut single “Put The Hammer Down” which was released a few weeks ago.

Sleaze Roxx: Why did you choose “Backstage Betty” was chosen as the second song to be released? 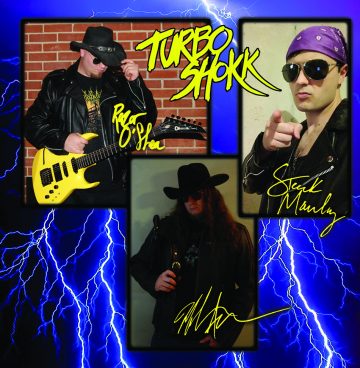 Michael Arcane: Sometimes these things just choose themselves man. Like a certain song just speaks to you, you know. You’re listening to the album, and it’s like a voice in your head, and she’s saying “I gotta be the one, I’m your second single.” Now granted, that’s not what happened here at all, but it does happen. I think in this case we just argued about it back and forth for a while.

Razor O’Shea: Yeah, I guess man. Arcane was really gunnin’ for this one because it starts out with four bars of solo drumming, that’s really what it boils down to. Ya know, when he hears a song with drums on the radio, he thinks it’s him doing it. That’s no shit, either. He’s not exactly the brightest guy. Shit, it could have been any song, any album. Be lucky you got this one, not “Some Like It Hot” by The Powerstation.

Michael Arcane: Dude, you’re so full of it sometimes. ‘Backstage Betty’ wasn’t even my first choice, man. I wanted ‘Hot For Teacher’ but nooooooo.

Sleaze Roxx: What’s the inspiration/story behind the lyrics for “Backstage Betty”?

Razor O’Shea: Minneapolis Betty was actually a girl from L.A. named Theresa McCallen. She said she was from the Hermosa Beach area.

Stack Manley: We changed the name to protect her identity.

Michael Arcane: She was great.

Razor O’Shea: Yeah, definitely. She wasn’t just another wham-bam groupie. She really went all out. She had all kinds of mints and lotions and toys… lots of fun. She actually toured around with us for three weeks, which is about two weeks, six days, 23 hours and 53 minutes longer than we’re used to being around chicks.

Michael Arcane: She was great.

Back at the end of October 2016, Turbo Shokk did a full-length interview with Sleaze Roxx.

You can pre-order Turbo Shokk‘s debut album Get Radical at the band’s Bandcamp page.