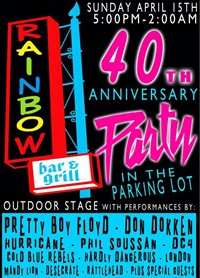 “To simply say that it’s an honor to have been selected to headline this gig would be an understatement,” say Pretty Boy Floyd guitarist Kristy Majors. “When I first came out here from New York City in the late 80s, the Rainbow was already the stuff of legends, the place where Led Zeppelin, the Beatles and the Who used to hang out. Everybody who’s anybody has been to the Rainbow. I can’t tell you what an honor it is to have been chosen to headline this event.”

The Rainbow’s clientele is a veritable “Who’s Who” of rock music, including Elvis Presley, the Beatles, Led Zeppelin, the Who, Janis Joplin, Lemmy, Motley Crue, Guns N’ Roses, Poison, the Red Hot Chili Peppers and many, many more.

The event is free to attend, and will take place in the Rainbow and their parking lot this Sunday from 5:00 pm til 2:00 am.

Pretty Boy Floyd was formed in Los Angeles in the late 80s. They have toured globally and released several albums, selling over a million copies internationally. The group is currently in the studio completing work on their new self-titled album, scheduled for a late Spring release.