Glam metal band Pretty Boy Floyd‘s frontman Steve “Sex” Summers has just announced that he and guitarist Kristy Majors will be returning this year with a new album, which will be presumably under the Pretty Boy Floyd name.

“Kristy Majors and Steve Summers return this year with a brand new record over 25 years in the making. Next show is May 15 in Las Vegas at the Eastside Cannery for the Vegas Rocks Magazine Hair Metal awards where they will be performing and receiving the Sunset Strip Glam Kings award. Other artist performing and receiving awards are Twisted Sister, Scorpions, Doro, Winger, Quiet Riot, Bulletboys, Stephen Pearcy and many more.” 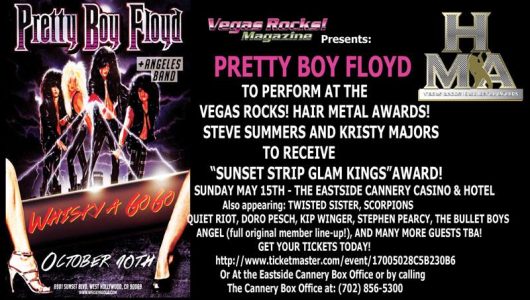 PRETTY BOY FLOYD ” I WANNA BE WITH YOU” OFFICIAL MUSIC VIDEO

PRETTY BOY FLOYD- I WANNA BE WITH YOU (OFFICIAL VIDEO) FROM THE ALBUM LEATHER BOYZ WITH ELECTRIC TOYZhttp://kristymajors.com/http://prettyboyfloydband.com/