Glam rockers Pretty Boy Floyd featuring frontman Steve Summers and lead guitarist Kristy Majors have announced that former drummer Vik Foxx will be back in the line-up for a series of upcoming shows.

The following message was posted on Summers‘ Facebook page yesterday (with slight edits): Foxx played in Enuff Z’Nuff from 1988 to 1992 including the band’s first three albums. He also played on Vince Neil‘s solo album Exposed that was released back in 1993.

Discogs states the following about the drummer: “Vik “Vikki” Foxx (born September 20, 1968) was the first drummer for Enuff Z’nuff, but is most recognized as the drummer for the Vince Neil Band and The Veronicas (although he is not credited on their debut album, The Secret Life of… as the recording drummer). He has also toured with Warrant, and Supercool. In the summer of 2007, he did some shows for Dokken, due to regular Dokken drummer “Wild” Mick Brown being on tour with Ted Nugent.” 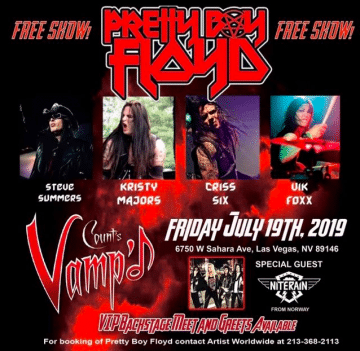