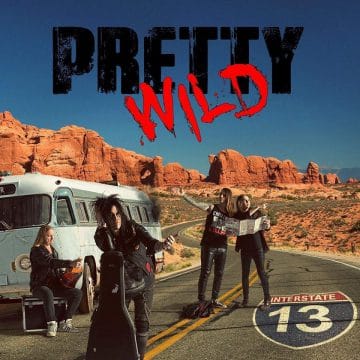 “We are breaking the silence with the best News ever! We finally have our release date for the new Pretty Wild album Interstate 13 & are now under the wings of Black Lodge records. Interstate 13 will be released 31st of may 2019 and there are two more singles to be released on 5th april and 10th of may! So stay glued to our social medias cuz’ we are gonna post alot of stuff in the near future! pre-order the album here! ——> http://smarturl.it/“

Sleaze Roxx stated the following in its review of Pretty Wild‘s All The Way album back in 2009: “The good folks at Swedmetal Records sure know how to pick some gems out of the pretty impressive (mainly Swedish) ‘sleaze invasion’! Pretty Wild is a 4-piece band which formed in 2006 and since then they have earned their reputation as a constantly evolving rock’n’roll machine on various stages on both sides of the ocean. All The Way is sort of an appetizer for their upcoming debut album which will be released later this year. And man, after hearing the six (plus a live version of “Dangerous” and a revamped “Let The Good Times Roll”) songs on this disc, I am awaiting it eagerly!”