Swedish rockers Pretty Wild will be releasing their new studio album Interstate 13 sometime later this year. The group has released a video for its new song “Break Down The Walls” which was released back in December 2016. 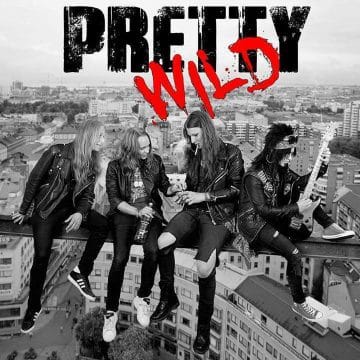 “Pretty Wild was founded in 2006 in Malmoe, the line-up at that time was Krizzy Fields, Kim Chevelle, Johnny Benson and Tim Pretty. The guys wanted to play 80′s metal and recorded a three song demo. Tim Petty later left the band and new frontman Ivan Höglund joined the band.

The guys did a lot of shows in both Europe and USA and shortly after released their first EP “All The Way” on an American label. That didn’t work out very well and they even renamed Johnny Benson in the booklet to Jimmy.

The guys rerecorded the EP and added a few song in their studio outside Malmoe. This time with better sound and with Martin Sweet producing it.

They signed with swedmetal and released the album “All The Way” in late 2008 and in 2009 it hit the swedish charts placing third in the main rock category and number one on the mid-price list.

“All The Way” got alot of good reviews and the band was featured in several rockmagazines.

The band continued touring and started to work on new material for a second album. In 2010, Krizzy Fields parted with the band and Axl Ludwig joined. The band did another tour with Axl and then began the long road towards the next album.

Some setbacks along the way delayed the process but now the new album is ready and the guys are back stronger than ever with a 14 song album with big choruses and that arena rock feel we all love!”

Sleaze Roxx stated the following in its review of Pretty Wild‘s All The Way album released back in 2009: “Each song on All The Way is a winner and a must-hear for every fan of Danger Danger (Screw It!), Poison (Flesh & Blood), the already mentioned Roxxi and similar bands. Add a dose of the brilliant Crashdiet and Crazy Lixx vibe to the mix and you get Pretty Wild. Sound-wise, this is also top-notch, as Crashdiet‘s Martin Sweet seems to have grown into a very good producer and does a great job, which especially shows in the backing-vocal arrangements. This is how hair/sleaze-metal should sound in 2009, but this disc is much too short. Bring on the debut!”

Pretty Wild‘s “Get It On” video:

Pretty Wild – Get It On

“Get It On” is taken from the album “Pretty Wild”.Order CD: PRETTY WILD – “Pretty Wild” here: http://smarturl.it/pretty_wildFollow Pretty Wild on Spotify: ht…