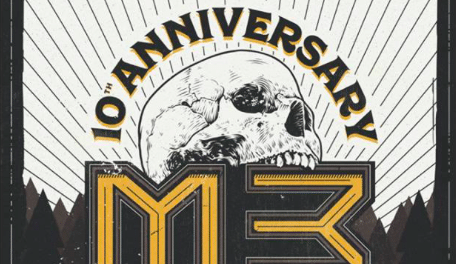 Preview of Day One of M3 Rock Festival’s 2018 edition 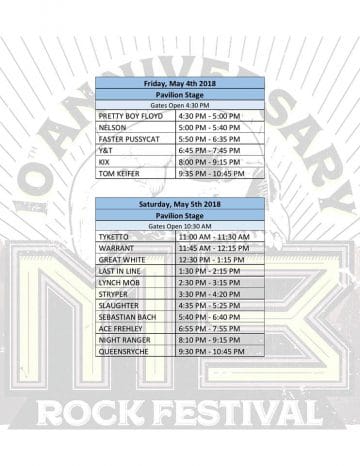 Founded in 2009, the M3 Rock Festival is back for its tenth consecutive year when it hosts two days of hard rock and heavy metal at the Merriweather Post Pavillion in Columbia, Maryland on May 4th and 5th. Over the years, the M3 Rock Festival has morphed into a two day festival where the first day takes place on a Friday evening and usually consists of about five bands usually headlined by Maryland home state favorites Kix. The second day is the biggest of the festival, featuring approximately twelve hours of music (minus stage setup time).

Day One of the M3 Rock Festival‘s 2018 edition features six bands consisting of Pretty Boy Floyd, Nelson, Faster Pussycat, Y&T, Kix and the evening closer Tom Keifer (Cinderella frontman). In addition, V.I.P. ticket holders will be treated to a performance by none other than Tesla guitarist Frank Hannon. 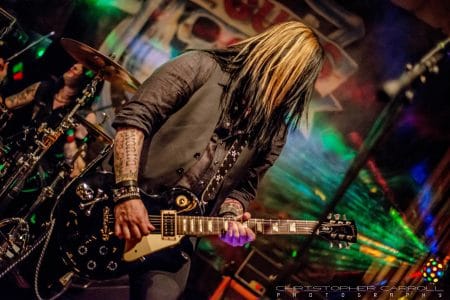 Wikipedia states the following about Pretty Boy Floyd: “Pretty Boy Floyd is a glam metal band from Hollywood, California, formed in 1987. They are most famous for their 1989 debut album Leather Boyz with Electric Toyz and the two singles from it; “Rock and Roll (Is Gonna Set the Night on Fire)” and “I Wanna Be with You”. The band broke up in 1991 but reformed in 1995, releasing several new records since that time, and continue to the present.”

Sleaze Roxx stated as follows in its review of Public Enemies: “So, does Public Enemies deliver the musical goods and chops that Pretty Boy Floyd fans have been hoping for? You can bet your last dollar that it does! The songwriting on this album is very much in the same style as Leather Boyz but with a 2018 update in production. The gang vocals, crunchy guitar riffs and sing-along arena anthems are back with a vengeance. I think most fans will wonder what took so long and why the band didn’t keep it together since there’s been quite a resurgence of interest in ’80s rock spawning reunion tours and festival shows. Will it matter that 50-something year-old men are singing about beautiful teenage girls bringing them to their knees, parties and sex? Haters and critics might think so, but the fans of Pretty Boy Floyd certainly won’t.”

Nelson are back at the M3 Rock Festival for a second time after first appearing in 2010. 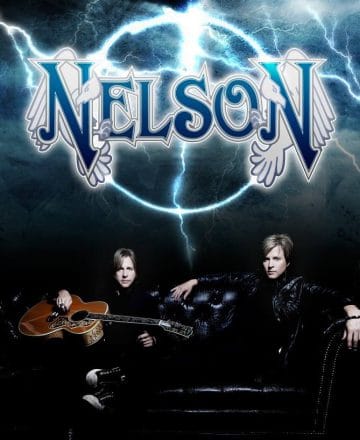 Wikipedia states the following about the group: “Nelson is an American rock band founded by singer/songwriters Matthew and Gunnar Nelson (twin sons of Ricky Nelson and Kristin Nelson). The band achieved success during the early 1990s with their double platinum debut album After the Rain, which featured the number-one hit “(Can’t Live Without Your) Love and Affection”.

After the success of their first album, the band claims to have been faced with conflicts with their record label, lack of support from the media, and the shift in music towards grunge and alternative rock. They eventually split with Geffen Records in 1995. Despite this, the band has continued to produce and release albums independently under their own label, Stone Canyon Records.

Matthew and Gunnar also perform under the name of Ricky Nelson Remembered, as a tribute to their father. They are listed in the Guinness Book of World Records as the only family to reach number one record status in three successive generations (beginning with grandparents Ozzie and Harriet Nelson).

Nelson‘s “(Can’t Live Without Your) Love And Affection” video:

Nelson – (Can’t Live Without Your) Love And Affection [Official Video] 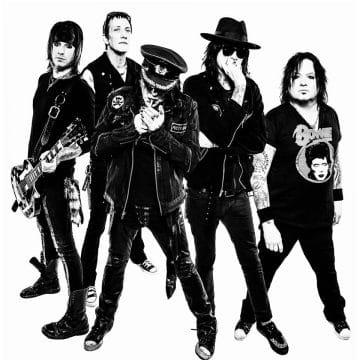 turned out to be a very memorable one as the band’s long-time frontman Taime Downe was hospitalized the day before for what was first reported as a severe case of bronchitis, which was later confirmed to be pneumonia.

Wikipedia states the following about Faster Pussycat: “Faster Pussycat is an American glam metal and glam punk band from Los Angeles, California formed in 1985. The group was most successful during the late 1980s with their self-titled debut album, their 1989 gold album Wake Me When It’s Over and the 80,000 selling Whipped! in 1992.

FASTER PUSSYCAT – “Don’t Change That Song” from the first album “Faster Pussycat” (1987), watch out the new album “The Power & The Glory Hole” as Special Eur…

Veteran hard rockers Y&T are the oldest lasting group to be featured at the M3 Rock Festival‘s 2018 edition and are returning for the fourth time after appearances in 2009, 2015 and 2016. 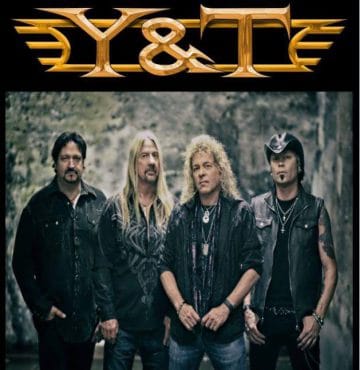 Wikipedia states the following about Y&T: “Y&T (originally known as Yesterday & Today) is an American hard rock/heavy metal band formed in 1974 in Hayward, California. The band released two studio albums on London Records as Yesterday & Today in the 1970s, before shortening their name to Y&T and releasing several albums on A&M Records beginning in 1981, as well as albums on Geffen Records, Avex Records, and others. The band was originally co-managed by Herbie Herbert (who also managed Journey) and Louis “Lou” Bramy. The band has sold over 4 million albums worldwide to date.”

Sleaze Roxx stated the following in its concert review of Y&T‘s performance at M3 Rock Festival‘s 2015 edition: “Having grown up in the 80s era of music videos, the first songs that I heard from Y&T back in the day were “Contagious” and “Summertime Girls” so it was a real treat to hear the band play both of those songs during the rather limited portion of Y&T‘s set that I was able to catch. “Contagious” in particular sounded just fantastic. You could tell just how much pride that Y&Tfrontman Dave Meniketti has in what he and his band do as he declared that Y&T do not get any additional help (i.e. presumably backing vocals or anything like that) when they are on stage and that would stay that way as long as he was in the band. Meniketti shared a cool story with the crowd about the last song that I was going to hear from Y&T before heading over to the main stage to hear Queensryche. Apparently, Y&T had all their songs ready to go for their Earthshaker record back in the very early 80s when their producer asked if they had any extra riffs that he hadn’t yet heard. From that came the Y&Tclassic “Rescue Me” which is actually one of my favorite tracks from the band. Although I only got to hear four songs from Y&T at the M3 Rock Festival, I was quite impressed with them and will make it a point to try to catch the band play live once again in the future.”

Taken from “Contagious”, the eighth studio album by American hard rock / heavy metal band Y&T, released in 1987 through Geffen Records, which, like their pre…

Hagerstown, Maryland based Kix need absolutely no introduction to M3 Rock Festival attendees as the group is the only one to play all nine previous editions. Once the M3 Rock Festival added a second day, Kix have been for the most part the de facto headliner for day one and usually get the longest set out of any performers. It will be interesting to see how the M3 Rock 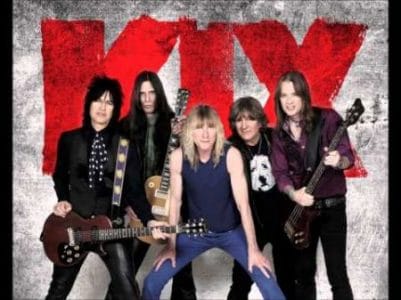 Festival concert attendees react this year as Kix will not be closing out the festival’s first day with Cinderella‘s Tom Keifer getting the honours this time. Of note, Kix are still scheduled to play the longest set out of any performers on day one.

KIX “Wheels in Motion” from the band’s first new album in 20 years, ROCK YOUR FACE OFF, out now! ITUNES – http://lnp.io/KIXiTunes, AMAZON – http://amzn.to/1u…

One of the seemingly most beloved M3 Rock Festival performers of recent years has to be Cinderella frontman Tom Keifer who is back for a fourth time in a row and is headlining the festival’s first day over perennial day one headliner Kix this year. With the chances of Cinderella reuniting seeming more remote with each passing year, Keifer has been able to reinvent himself as a solo artist with the release of his 2013 album The Way Life Goes, which reached the #5 spot on the Sleaze Roxx’s Top Ten Albums of 2013. Keifer recently released a deluxe version of the record and has been touring consistently for the last few years. 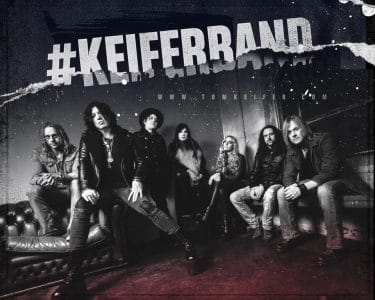 Sleaze Roxx stated the following in its concert review of Keifer‘s performance at the M3 Rock Festival‘s 2015 edition: “Next up was Cinderella’s Tom Keifer on the side stage. With nightfall having creeped its ugly and dark head, it was quite difficult to get a good view of the stage as the hill down to the side stage seemed pretty much packed. This was not surprising as leading into the 2015 edition of the M3 Rock Festival, there seemed to be some controversy on who should be the M3 headliner and Keifer seemed to be the prime act that naysayers wanted toppling Europe as the main festival act. While there is no denying Keifer‘s popularity among M3 attendees, I still think that Europe were the best headliner that the M3 Rock Festival could name out of all the acts that it obtained for its 2015 edition. I was pleased that I was able to catch the first song played by Keifer since the two M3 stages had unfortunately overlapped somewhat throughout the entire second day of the festival. Kicking off his set with the Cinderella classic “Bad Seamstress Blues / Fallin’ Apart At The Seams”, it seemed that Keifer had the entire crowd in the palm of his hands. Next up was “It’s Not Enough” from Keifer‘s solo record The Way It Goes which would have fit very nicely on a Cinderella record. By the time that Keifer and his group were finished playing the two Cinderella songs “Somebody Save Me” and “Shake Me”, there seemed to be a real buzz among the crowd. This is when Keifer took a short video of the crowd on hand before advising that he loves when the audience sings the chorus of this next “old country blues song” which was of course “Heartbreak Station” and which sparked a loud sing along from just about everyone in the crowd.”