Preview of Stryper’s show at The Cabooze in Minneapolis, Minnesota, USA on Nov. 2nd 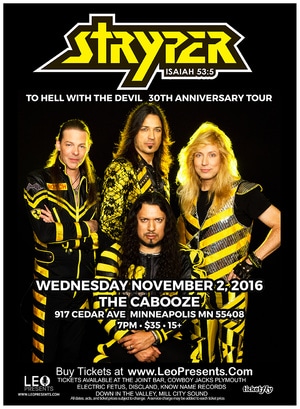 Stryper are in the middle of their 30th Anniversary tour for their breakout album To Hell With The Devil. They have been selling out venues all across the country and bringing this album to life by playing it in its entirety. They are also performing this amazing album with all the original members in their popular yellow and black outfits. Their gear is also garnished with the traditional colors that has been a staple in Stryper’s legacy.

Once the band has played To Hell With The Devil, they will take a short break and come back out on stage to play a few fan favorites from their other albums. This tour has been well received by their fans and the band makes sure to post pictures of each show they play to let the fans know how awesome they were that night.

Fans can also purchase VIP meet and greets for this tour. This package includes the opportunity to meet the band, take photos with them, get their autograph, and a chance to receive some rare “To Hell With The Devil” merchandise. Not only do you get what is listed above, but each package purchased has the chance to win a RIAA Platinum ‘To Hell With The Devil’ album award. This package is perfect for any lifelong Stryper fan and this opportunity should not be missed.

Metal Headz Media is excited to cover Stryper’s show on November 2nd at The Cabooze in Minneapolis, Minnesota, USA. The band is sounding amazing live and Michael Sweet still has the voice to make all those hits come to life. Oz Fox is a monster on the guitar and is one of the underrated guitar players to come out of the ’80s. Robert Sweet is a mastermind behind the kit and keeps the beats pounding with Timothy Gaines and his perfected bass lines. What is most exciting for Metal Headz Media about this show is this will be its first time seeing a band play an album in its entirety.

If you are a Stryper fan, this is a show you cannot miss. It has been reported that after this tour, Stryper will be taking a long break and are not sure when they will return.

Stryper‘s To Hell With The Devil 30th Anniversary Tour promo:

Stryper ‘To Hell With The Devil’ 30th Anniversary Tour Promo

Iconic rock band Stryper will celebrate the 30th anniversary of their multi-platinum album To Hell with the Devil this fall with a world tour, featuring all …