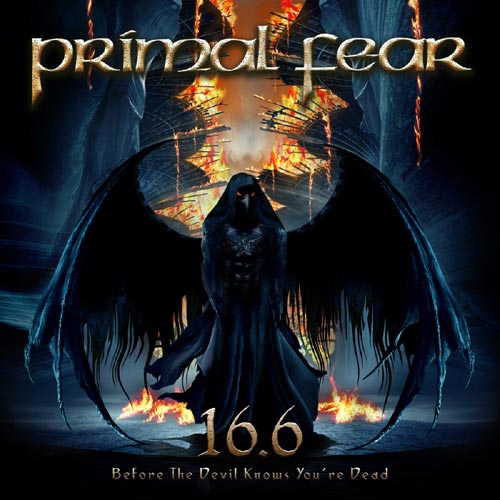 Frontiers Records (www.frontiers.it) proudly announces the release of PRIMAL FEAR new studio album 16.6 (Before the Devil Knows You’re Dead) on May 22nd in Europe and June 9th in the USA.

Anticipated by a successful listening session held in Cologne, Germany, attended by the cream of the European Metal press, the new album is about to bring back Primal Fear to the throne of Heavy Metal. 16.6 is easily the most powerful, ambitious and interesting album in the band’s history. The vibe of songs like the opening track “Riding The Eagle”, “Killbound” or “Under The Radar” are reminiscent of the “Nuclear Fire” album but eh whole album features all the trademarks of the Primal Fear sound a the total dedication to pure Metal. There is also a new approach mixed with the trademark PF riffs in tracks like “Six Times Dead (16.6)”, “Soar”, “Smith & Wesson” as well as the epic stories, consummate musicianship, courage and fantastic melodies in songs like “Black Rain”, “No Smoke Without Fire”, “Torn” and the stylistically new ballad “Hands Of Time” with 4 band members all sharing the lead-vocals.

“Our target was to write and produce the most diverse and interesting album in the history of Primal Fear and combine our past with the future” says Mat Sinner. “The result went truly beyond our expectations and it will be a huge challenge to play these new songs on stage! The entire band is very proud of 16.6 and we hope all our old and even new fans will be totally satisfied!”

The album was recorded the House Of Music studios with engineer Dennis Ward, mixing engineer Achim Koehler and producer Mat Sinner. Once again Primal Fear display a very high standard of song writing, sound and production. New guitarist Magnus Karlsson and Henny Wolter shine with a new dimension to the guitar work, and lead vocalist Ralf Scheepers reaches a new level to his vocal performances. Nothing can go wrong if you’re backed by one of the best rhythm sections in metal with Randy Black and Mat Sinner and you can hear the result on Primal Fear’s outstanding new message called 16.6!

Some of the feedback gathered from the press after the listening session include:

“Primal Fear top themselves one more time again with their unique mix out of traditional Metal sounds and modern melodic power metal. How can do they that again and again?” – Andreas Schowe (HAMMER magazine, Germany)

“To date “16.6.” is Primal Fear’s most diversified record; containing a spectrum from Hard Rock up to double-bass driven Power Metal Songs. But one thing is always consistent – the quality!!! – Gerald Siebenmorgen (ROCK IT magazine, Germany)

“Primal Fear manages to take at least one step forward, one backward and still stand for what Primal Fear always has been standing for – pure metal.” – David Bergstrom (SWEDEN ROCK MAGAZINE, Sweden)

The first pressing limited edition in digipak will include two exclusive bonus-tracks:
14. Cry Havoc
15. Scream
Plus a multimedia videoclip of Six Times Dead (16.6)

After the Primal Fear / Sinner show in Moscow on April 4th, the band will appear in Norway on April 25th at the Haugesund Festival and in some summer Festivals. More shows are being booked in South America (with Sinner), USA incl. PPX and more dates early next year, with Europe kicking off at the end of September (with Brainstorm). More news soon !