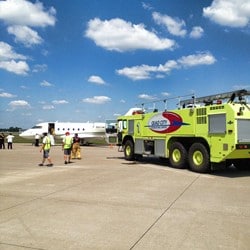 A private jet carrying rock bands Ratt and Dokken had to make an emergency landing in Moline, Illinois after smoke was detected in the cabin.

Chuck Brennan, a friend of the bands who chartered the flight, told The Associated Press that the plane took off from the Moline airport early Saturday afternoon but pilots had to turn it around when smoke appeared at 7,000 feet.

The members of Ratt Tweeted that they “just made an emergency landing after a fire in the cockpit. We are ok!” Dokken bassist Sean McNabb added, “Got hairy but safe! We’re good rolling in SUV’s to Chicago — tour rolls on.”

The plane landed safely, and there were no injuries reported by the pilot or the 13 passengers. Brennan says the bands took ground transportation to Saturday’s concert in the Chicago suburb of Wauconda.

Ratt and Dokken have been playing select shows with Sebastian Bach and Lita Ford. The package performs on August 17th in Wauconda, Illinois followed by an August 18th performance in Kalamazoo, Michigan.

Brennan, a former promoter who opened the Brennan Rock & Roll Academy in his hometown of Sioux Falls, South Dakota, said he had chartered the plane out of Santa Ana, California, for a four-city tour.