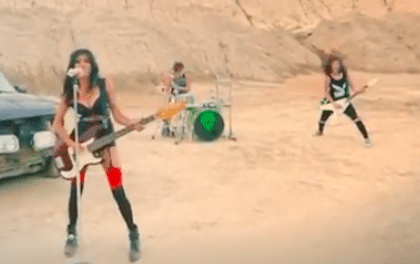 Priya Panda mum on why C.C. Diemond and Tyrone Buccione not in Diemonds’ new video

Diemonds have released their fourth studio album last month and a new video for the track “Our Song” last week. 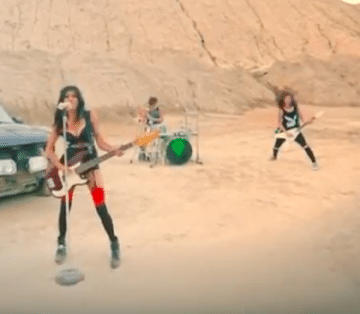 The video depicts Diemonds as a three-piece consisting of Priya Panda on lead vocals and bass, Daniel Dekay on guitar and Kyle Lecourt on drums with notable absences from long-time guitarist C.C. Diemond who played on all four Diemonds records and bassist Tyrone Buccione who played on the latest album.

The video was also reposted on Diemonds‘ Facebook page earlier today with Panda making the following comment when someone asked about the absences from Diemond and Buccione: “Hey Alexander, you can feel free to ask them about their whereabouts. At the end of the day, the band exists as an entity and there will be those who come and go.”

In an interview with Sleaze Roxx in early August 2018, Panda mentioned that there had been a lot of interpersonal issues within the band during the making and recording of the new album. In terms of the rumours that the group had broken up at one point during that time period, Panda advised: “Ummm. There were massive

interpersonal issues with the band at that time. Absolutely. We’ve been a band for a long time and there’s been a lot that we’ve done. There’s been a lot that we have tried to do that just hasn’t, you know, materialized for us and starts… We love doing it and we love playing shows and making albums and meeting our heroes and meeting our fans but it weighs on you when you come home and you’re fucking broke still. Like I have seven jobs when I come home from tour.” She went on to add, “It’s tough. It’s fucking insane. Yeah. The whole thing is difficult to maintain all the time. I mean obviously we’ve had [past] members pass away. We’ve had members fuck off. There’s people that have played in our band that I would never want to see their face ever fucking again.”

Interestingly, Panda also stated during the interview that Dekay ended up not playing on Diemonds‘ latest album although he is still in the band. When asked how come, she responded: “Ummm. [Sigh] That goes back to the massive interpersonal issues that we had on within the band during the recording process. There was a lot going on. Obviously, I have patched things up with Dekay but you know, it was hard there for awhile. I am glad to still have [him as] my friend.”