Diemonds lead vocalist Priya Panda was recently interviewed by Belgian Jasper and she spoke about her new solo tunes, her time in Diemonds and more.  Canadian sleaze rockers Diemonds released four albums — In The Rough EP (2008), The Bad Pack (2011), Never Wanna Die (2015) and Diemonds (2018) — each time with a different line-up with the only two

mainstays being Panda and guitarist C.C. Diemond. The Bad Pack finished at #6 on the Sleaze Roxx’s Top 12 Albums of The Decade (2010-2019). Panda moved to Los Angeles, California about two years ago after living in the greater Toronto area in Ontario, Canada for most of her life, and there has been very little news ever since coming from the Diemonds camp.

During her interview with Belgian Jasper, Panda was asked whether Diemonds were on hold to which she replied (as transcribed by Sleaze Roxx):

“Well, I’ll say that the band was already kind of on hold before I moved to Los Angeles. I wanted to give myself the chance to work and play elsewhere, and create in a different environment. I couldn’t do the winters anymore [inaudible] where we’ve done four winter tours, and the van has broken down, you’re sleeping… it’s like -40 outside and there are five of you sleeping in the van. So I don’t know. It wasn’t just me. Things were tense at the end and we did our last record. The big thing that happened when we made The Bad Pack, it was actually originally made in 2010 but then we got signed and we put it out in 2012 and that’s generally the version that most people heard because we toured so much for that three-year period. So Never Wanna Die got really put, it kept getting delayed and delayed. That’s I think honestly where the beginning of a lot of the tension began in terms of our creative outputs.

Diemonds‘ “Take On The Night” video (from The Bad Pack album): 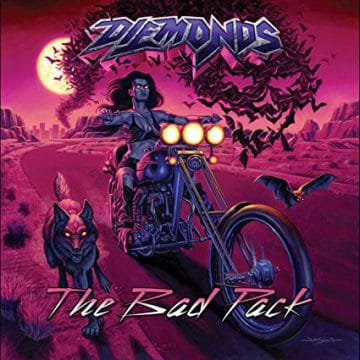 were into, Cinderella and all that stuff. And then you know, by the third album, I don’t know. They moved around a lot. By the fourth record, I was finally getting into where we were heading because I think the melodies and the songs were easier to sing along to. That’s the kind of stuff that I listen to. Everything is super melodic and super catchy, and that’s what I wanted to do too. By the time that we were making that album, we were in such miscommunication that Daniel [Dekay] didn’t end up playing on the record. C.C. plays all the guitars on the record. Yeah, it was just a big change and things were not the same for all of us that they once were I guess.

We’re all a lot better now but you know, we were just having really bad communication issues. We’d spent a long time together. We’d grown up together. And like for four years, we’d come home from six week tours and me, C.C. and Dekay would live in a two bedroom apartment together. That was for three and a half years. But that was just an extension of the band. Like the apartment was as big as a fuckin’ van you know. We’d come home and that was our life. It was just a continuation.”

When Belgian Jasper noted that the band didn’t get to unplug, Panda continued: “No. The Jagermeister, the van, staying up all night, and having people come over all the time, it felt like the tour never stopped. I think that last record, to encapsulate this 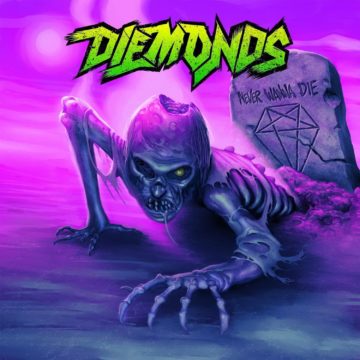 whole story, me moving too L.A. — what came first, the chicken or the egg? It definitely wasn’t me moving away that affected the relationships within the band. That was much pre-existing and so.

Since then, we’ve gotten what I would say… When I started Diemonds, we got our dream gig since I moved away. You step away from something and you get what you need you know. And what I needed was to play on the Monsters of Rock [Cruise]. Seriously, I did! It’s an ’80s cruise. We really don’t have any place being there. We didn’t start in the 1980s or the ’90s. Didn’t even start in the early 2000s [laughs]. Like you know, it’s so far away that to have a new band there, it’s rare. We had to wait 10 years, nine years for them to call upon us and it was like, ‘Oh my gosh! This is like the gig that we always wanted.’ Vain is playing on the cruise, and so is Killer Dwarfs and KIX all at once. We’ve never even seen KIX. They don’t play in Ontario. Being on the Cruise was… It felt like we’d come full circle. I don’t know. It validated a lot.”

Diemonds performing “Loud N Nasty” at the Star Lounge on the Monsters of Rock Cruise on February 12, 2020:

You can listen to the interview with Priya Panda by Belgian Jasper below: