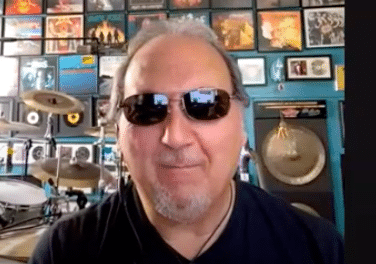 The Rods drummer Carl Canedy was recently interviewed by Jimmy Kay for Canada’s The Metal Voice. Canedy has a new solo album titled Warrior that will be released via Sleaszy Rider Records on August 7, 2020. 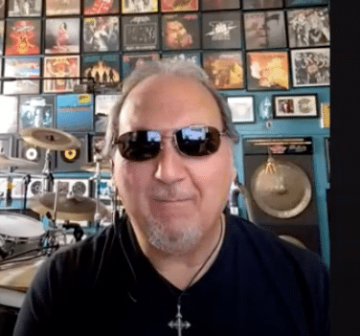 In terms of producing Fistful of Metal, Canedy indicated (with slight edits): “The band was great. Neil Turbin — what a powerful singer. As we went along the  timeline of recording of Fistful, the time for the vocals kept getting shorter and shorter. We ended up compressing Neil‘s time. So the poor guy ended up singing the album in a very short period of time. I have apologized to Neil for that. I was a young producer and I was too worried about the technical side at the time. However, Neil rose to the occasion and he killed it on that album. After Neil departed, Anthrax came back with a singer called Matt Fallon (Skid Row). After a week in the studio (recording Spreading The Disease), I told the guys in Anthrax, ‘This is not the guy who is going to get you to the major record labels.’ So I called Jonny Zazula and Jonny said ‘Put the band on the phone.’ They go in the conference room, five minutes later, they come out and they said ‘Jonny wants to talk to you.’ I pick up the phone and Jonny said ‘Put him on the bus (Matt Fallon).’ Talk about a ballsy move the album is recorded and now they have no singer. Then I was able to find Joey Belladonna.”

Wikipedia states the following about Fallon‘s time in Anthrax (with slight edits): “After Anthrax finished touring in support of Fistful of Metal, vocalist Neil Turbin was expelled from the band. Matt Fallon replaced him, but was quickly fired because he lacked confidence in the studio. Producer Carl Canedy suggested the group to audition Joey Belladonna, who was not familiar with thrash metal. Though the band members were not pleased with Belladonna‘s musical background, they hired him and booked a few shows with their new frontman.”

Sleaze Roxx conducted a rare interview with Fallon (who also fronted Skid Row at one time) back in January 2016 and asked him how he ended up joining Anthrax and how was his time in the band to which he replied:

“Back in the early ’80s, Metallica were doing some promo appearances prior to the release of their first album ‘Metal Up Your Ass’ [Kill ‘Em All]. At the time, I was playing with Dave Sabo in a cover band called Steel Fortune and we had a strong local following so we were asked to open for Metallica at their last show. Anthrax was also on the bill and that’s where I first met the band. Scott Ian approached me a while after that during one of our shows at L’Amour’s [in] Brooklyn and asked if I’d be interested in joining them. The band needed to get back in the studio quickly to record a follow up to ‘Fistful of Metal’ and wanted to replace their current singer. The whole thrash metal thing was new to me at the time so I wasn’t really sure at first, but after playing in cover bands for several years, the idea of being able to record an album sounded pretty cool, so I figured what the hell and went for a tryout. After jamming with the band and getting the thumbs up, Scott gave me a cassette with some raw tracks they had been working on and asked me to write lyrics, so that’s exactly what I did.”

In terms of why he ended up leaving Anthrax, Fallon stated: “Once we had enough material ready, we went directly into the studio to lay down the tracks, and that’s where I got to know the band’s producer Jon Zazula. Jon seemed to have a lot of control over the band and was involved in every decision, even those involving songwriting. This was a different situation than I was used to, but I was a cocky kid so maybe I rubbed someone the wrong way. Who knows? Anyway, it didn’t work out and we parted ways before finishing the album. However, one big mistake I made was not getting copyrights for the songs I wrote because they wound up using a lot of my lyrics and I never received any credit. In fact, the album simply said “All songs written by Anthrax” instead of listing the individual writing credits that you would usually see. That was tough to take, especially when you turn on the radio and have to hear someone else singing the words to songs you wrote… and the fact that no one but myself and Anthrax knows the truth… but I guess you live and learn.”

You can read other excerpts from the interview with Carl Canedy by Jimmy Kay at The Metal Voice‘s website and/or listen to the interview below: