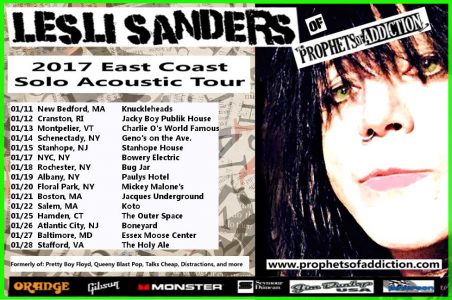 Current Prophets Of Addiction frontman and former Pretty Boy Floyd and Queeny Blast Pop member, Lesli Sanders, will be releasing a new solo album in the new year and is embarking on a three week acoustic tour to support his new record starting on January 11, 2017.

The following message was recently posted on Prophets Of Addiction‘s Facebook page:

“Lesli Sanders songwriter, singer and bassist of Prophets of Addiction will be out on the East Coast in January in support of his new new solo release doing an acoustic tour. Please come on down and check it out, and spread the word, lets keep this live music thing happening. THANKS”

Back on October 29, 2016, the following message was posted on Sanders‘ Facebook page:

“The songs are sounding good for the new solo acoustic recording. In the pre-production stages now, just recording them at home. Once I have them written and arranged, gonna go sit in a great sounding room somewhere and just record them live, and REAL”

Of note, Prophets Of Addiction have a new website store up and running.

Prophets Of Addiction‘s “As We Fall” lyric video:

Prophets Of Addiction – As We Fall (Official Lyric Video)